Hiiiiiiiiiii!
it's been a long while, hasn't it?
I've got loads to tell you and it will take a while for me to find enough time and concentration to blog everything.
First of all: I'm back from India! oh yeah, I went to India. I saw loads of things and learnt a lot too. I journaled about every single day I spent there which could easily be 20 pages (which I will put in here soon) and I'm still slowly going through over a thousand photographs to put in the blog.
Second, I didn't get into the Twisties Superstarz finale. I can't say that I'm not disappointed, but I can't just get stuck and give up. Which brings me to what I did yesterday...
I've been joining a youth group who meet up every Saturday and they're organizing a talent show. We had rehearsals every week. After months, the real talent show is next sunday and... I'm ready!
I read about this carnival going on throughout the weekend and there's a little, sort of like singing/busking competition going on at one of the booths. I wrote to them, and they said "just come!" I sort of knew that something would go wrong. I mean, has anything like this actually work the way I wanted it? Right after the full rehearsal for youth got talent, we went straight to Tropicana City Mall for The Star's Carnivale. We walked in the entrance and they gave us free lemonade! I saw the coolest game ever where you stand in front of the TV and it actually senses you there and each move you take, the character in the came moves along with you. Really high-tech, technology these days.... Then, there was a Nerf gun section with an automatic nerf gun shooting out hundreds of foam bullets. Many things going on at the same time.  We found the booth, and they're called RAGE :) They then said that they had to "scrap the event because there wasn't enough response". But then, they said that I could get to sing on the stage. After a while of waiting they let me know that I could just sing on the floor because I can't use the stage. I was really hesitant. More afraid than anything else. I did it anyway. It was fun actually. I wasn't so scared because people couldn't really hear me anyway. I found it funny when I'd sing, and then they'd play this Star Wars music and people with really, really cool light-sabers (not the kind you'd normally get from Toys 'R Us) and start performing a battle scene and I'd have to stop. A new experience for sure :) 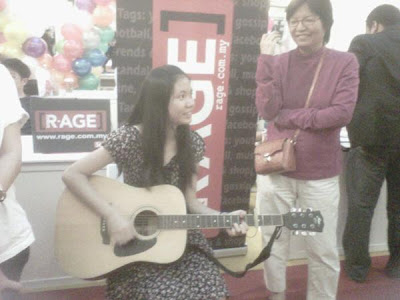 I also uploaded a new video on YouTube. Been thinking about it the for a while, and I slowly started seeing how the video would be like. Then, Taylor Swift won Entertainer of the Year at the CMA awards and she released three new songs to iTunes AND, it was 11/11/11 :) Many good reasons to upload a video. But, I accidentally deleted all the video footage I took. Seeing a two-hour window before we had to go out to KL for my school reunion so I quickly re-recorded everything. So here it is,
If This Was A Movie. I hope you like it!