I swear, if you come to India, it will change your life. Maybe in a small way, maybe not so small. Each of us live our lives so comfortably in our pretty little bubbles that we don't really know what's outside. Our biggest problems are things like wether to buy a Blackberry or an iPhone (seriously?!?) or getting many A's in an exam. These things hardly mean anything for most children I met in India where I was the past two weeks. These so-called "problems" we face are somewhat superficial in the real world where people have no place to stay and no clean water to drink.
At the end of the day, no one's going to notice what you wear, they're not going to care what phone you've got, neither will they look at the numbers of A's you got on that little slip of paper to get you a job, because sometimes exam results doesn't ensure you a great job.
I think it's about time to burst that bubble we live in and see what's really happening and you'll be surprised just how lucky you are.
We read about it, watch it on the news and hear about it on the radio. They try to bring awareness to what's happening in places like Kenya, Africa, India... and so on. But it's never the same as really being there. I didn't really go to rural area's in India, but people there are so poor when their surroundings are so rich. I find India really contradicting in that way where the rich are very rich and the poor don't even have electricity.
So last month, I went to India with my dad. Just the both of us, for an adventure and also for a conference and here's what I did, where I went and what I saw when my dad and I went to visit incredible India... 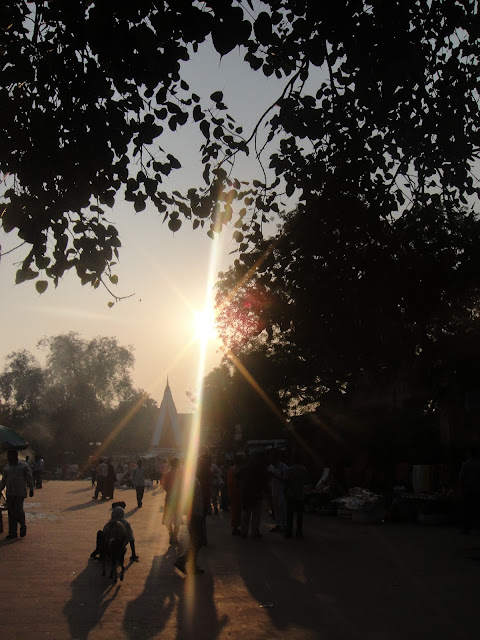 Got up at about 7 this morning. Still very sleepy, we went to the airport. Grandma-mama and grandpa surprised us by meeting us there. We had Mcdonalds for breakfast and the apple cake I made for my mom and dad's 20th anniversary yesterday. Then, it was time for us to board the the plane. Grandma-mama thought I raised enough money already and I was going to Nashville! (I wish!)
The plane we sat on to Delhi was the D7205 and it was about a 5-hour journey. It was smooth and comfortable and I'm glad we arrived in Delhi on time and safe. 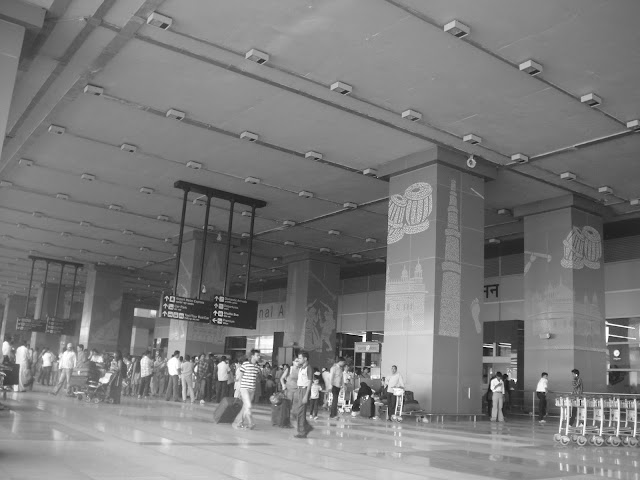 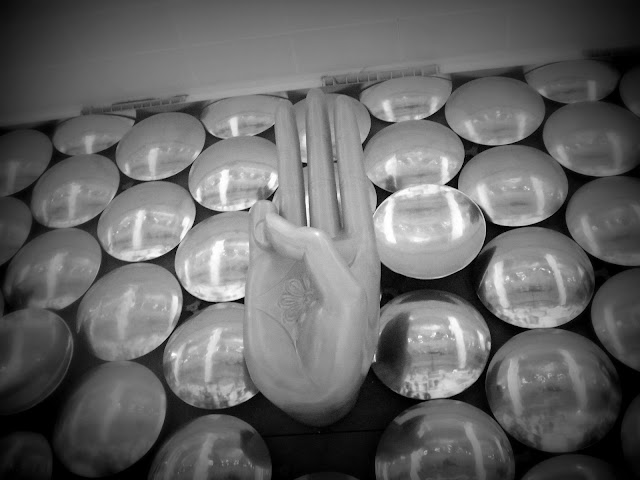 The airport had many interesting things including this hand gesture and the many others below. Not sure what it means though.... 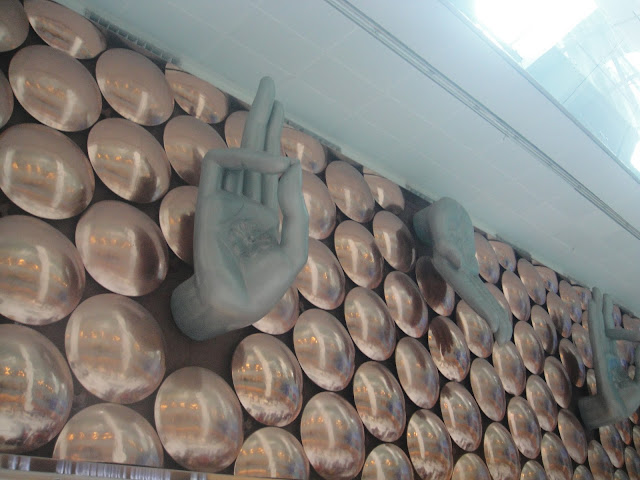 There were so many people at the airport! The scariest part for me was the security guards at the gates carrying huge, gigantic machine guns and they sat behind these metal shields as if preparing for war. Someone forgot to pick us up from the airport so papa called him and he came a little later. His car was pretty dented and I was wondering why. When we got to the main road, I understood why. The roads were crazy! People honk their horns all the time and if you don't make way, they charge forward anyway. There were small lorries on the road with only three wheels and motorised rickshaws, normal rickshaws along with cars, vans, busses. 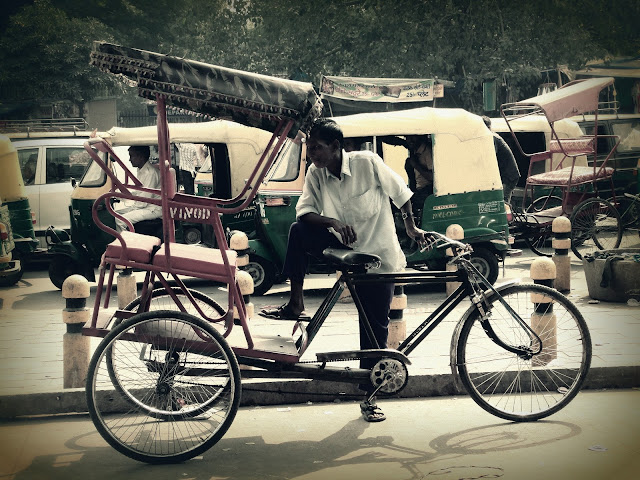 We got to New Delhi railway station and there were even more people! The queue was really organized. No one cut lines! Unfortunately, the train for the overnight train to Gaya was full and we had to book one for tomorrow instead. That meant, we have one more night here in Delhi. 14 more days without my mom and siblings feel like forever. Culture shock had not hit me yet though.
We checked into a small hotel opposite the railway station called Capital Hotel. It's quite a cozy place, with a TV, air-condition and a toilet. Pretty good, if you ask me. We rested for a while and went out for our search for food. Even though it wasn't even six yet here in India, it was already 8:30 in Malaysia. Eating food by the roadside was definitely our of the question, a rickshaw driver told us that he would take us to look at some things and then take us some place to eat. But he dropped us at a very high-class shop selling all sorts of stuff from jewelry and statues (at a very high price) and left. Thank goodness another rickshaw driver was there and offered to take us around. It was a very scary and exciting experience riding on a motorized rickshaw for the first time. I was holding on tight to the railing because there was no door and definitely no safety belt! We arrived at a place called Connought place, 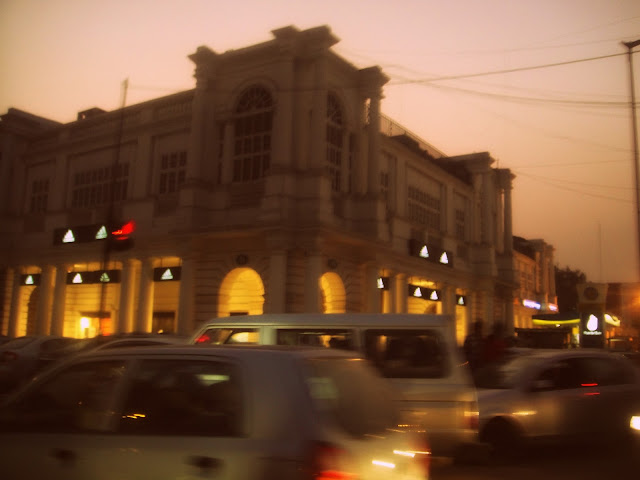 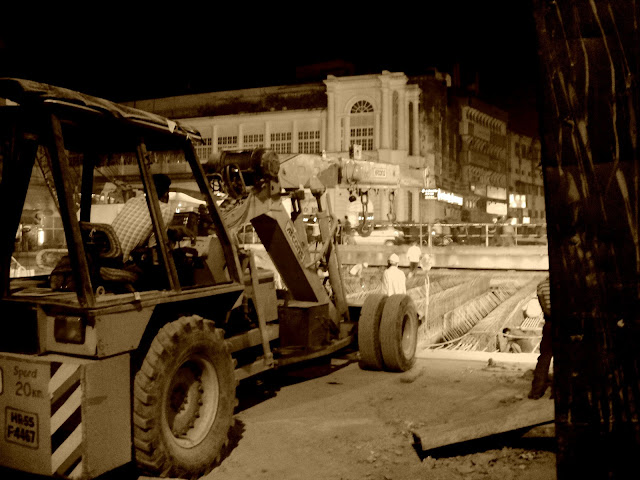 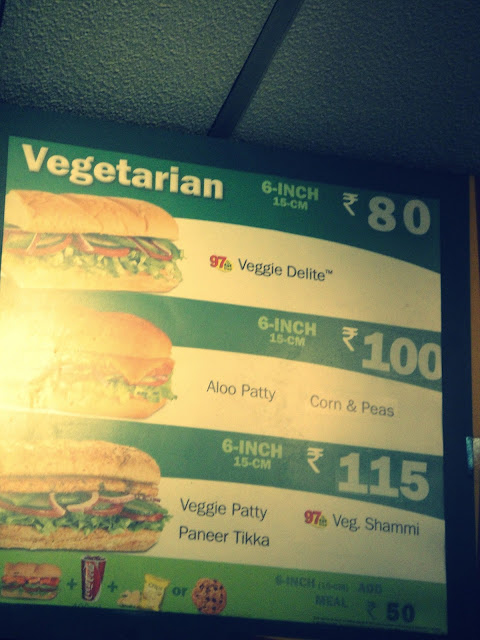 We walked around for a while and realized that there are both very rich people and poor people here. All sorts of branded stores like Adidas (two of them, actually) and Marks and Spencer and bakeries with security guards at the doors and on the other side, people living on the streets begging for food and money. Something I didn't see everyday. It makes me feel very lucky to born into the family I have and live where I live. 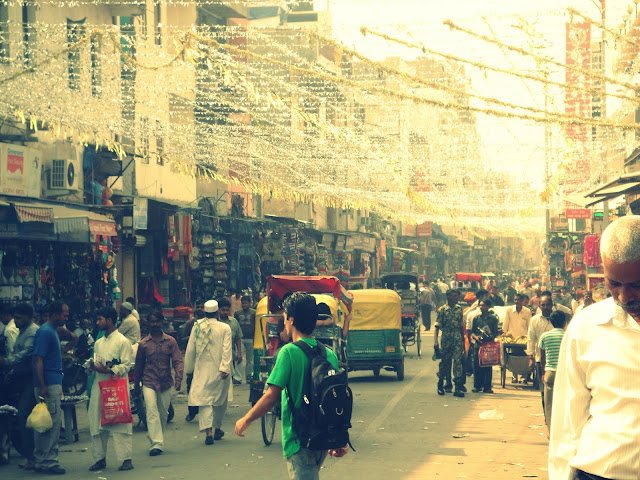