I joined this contest about a month ago organized by 8TV Quickie. Just sing any David Choi song and share it with them on Facebook. Sounded do-able. I recorded the song Let Go in my room and shared it on Facebook. At that time, I hadn't the slightest inclination of me being shortlisted at all, so I put my own spin on it and made his song my own.
Then, the craziest thing happened. I got shortlisted in the top 3! I was at Pusat Science Negara looking at Dinosaurs with the Clic kids when they called me up and asked me to come see the show live. They asked me to bring my guitar just in case. My mom got all excited and told everyone that I was going to be on TV. Then I told her, I'm going to watch not actually be on the show. But oh well. Disappointed they were when they waited up till 12 to see me and I wasn't there.
Back to the story...

My dad took my sister, brother and I to the TV station. It was pretty late already, about 10:30, nearly 11 when we got there and we were early!
We waited a while and met the other two winners, I'm not good with names but I was the only girl. We were then brought to the studio itself. It looks a lot smaller than it is on TV. David Choi was already there so we all shook his hand and took pictures of the set. I felt like a tourist! haha. There were so many people in that tiny room including Jin, Ruben, Joseph Germani, Guan, and I think the everyone from the My Generasi video. 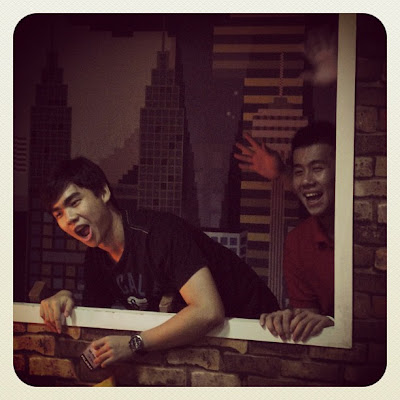 We got to watch David sound check and get ready. Then the producer counted down to the start of the show. It was really hard on all of us to not make any sound. I'm already pretty quiet by nature but when you emphasize that you have to be extremely quiet, I tend to be really aware of the fact I have to be quiet. I would make some kind of sound like accidentally kicking a wall lightly. It felt as loud as fireworks. The hosts Naqib and Adam introduced the guest and the director would yell through the monitors "clap clap clap!" and we all clapped.
I found that funny. 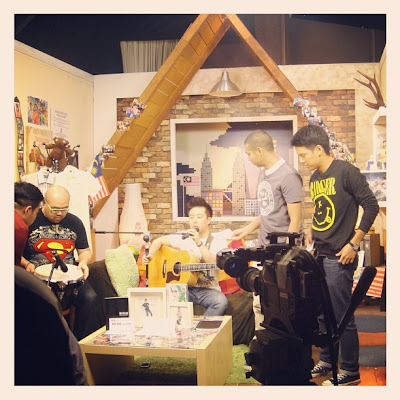 The show ended and people came in to take the table away. I thought, oh well. I guess we won't be recording after all since they were not sure about it when they called me. The three of us stood awkwardly at the corner wondering what was going to happen next. Then David announced the winner and it was... me.
Everyone clapped and I was freaking out inside. I didn't think I would win. Here's what went through my mind as it all happened: "I sang a different version. I should've sang it the same way he did in the video. Oh no, now I forgot the words!"Luckily, he forgot the words too.
But thanks to the internet and iPads, we managed to google it. 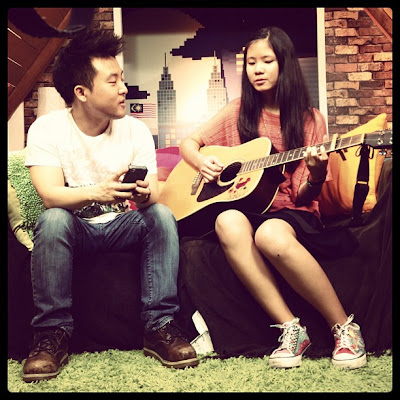 In the picture below, you can see someone holding up an iPad with lyrics on it. There were two cameras on us. It all happened so fast, I think I probably played terribly.
I had a lot of fun and it was an awesome experience! 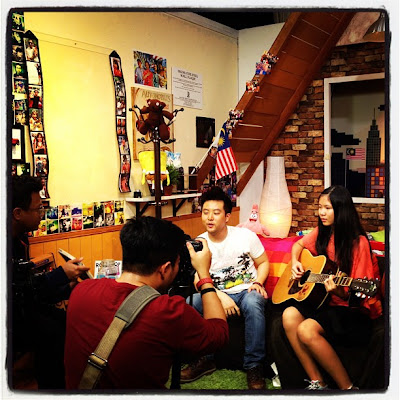 Thank you so much for the opportunity 8TV!