I took a deep breath and closed my eyes for a moment. I could've pinched myself, anything to remind me this is real life. I packed my bag and felt like I was forgetting something. We're really going, and I was beyond excited. 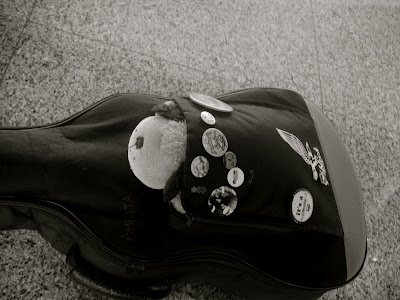 A year ago, I decided I wanted to go to Nashville. I've been watching the CMA fest online for a few years. Living vicariously through the pictures just wishing one day I could be there. I told my parents about it and the were like "go for it!!!" I love their extremely high optimism and support. I recorded 5 of my original songs at a studio as part of my fundraising to get to Nashville. It was simple, acoustic. Looking back I felt I could've done a whole lot better, but that was the past and I'm learning from that. I did a total of three shows at café's and a few open mics and within a year, managed to get just enough money for the air plane ticket. I have everyone who supported me to thank.

On Monday, my dad and I went to the airport with my grandparents, sister, brother and mom. We said goodbye and walked towards the terminal and our adventures to come.
Our flight to Hong Kong was delayed by an hour so when we got there, we rushed to catch the next flight to New York and made it just in time. It was a fancy plane. With individual TV's and remotes. They served food that was hot, and drinks that were cold. I looked out the window as we flew through night, day and night again, just utterly mesmerized by the clouds and need I mention?
Sunsets. 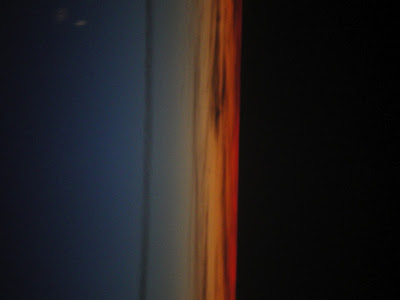 16 hours- one movie and the entire season 3 of Modern Family later, we finally arrived in New York. It was late and cold. We took a taxi to Newark where my dad found a really cheap inn to stay the night before our flight to Nashville the next day. As we were in the car, we got to look at the city and all the lights from a distance and it was beautiful. Maybe all cities at night are like that..
We arrived at the inn at about 1 am. It was nice. There was a TV and two beds and internet which was a lot more than we could ask for.
We got up early the next morning, and went downstairs for breakfast. There was a waffle machine and you could make your own waffles. Put the cup at a machine that looked like a coffee machine but it dispensed batter instead. Cool! They also had cereal. "Awesome!" was my first thought. We took the shuttle to the airport to check in and then took a train to New York city. It was cold. And they call this summer?
We arrived right at Madison Square Garden. Wow. So cool. We went full-on tourist taking pictures of EVERYTHING. At least we weren't the only one. It was just amazing. Loads of advertisements, buildings, people. 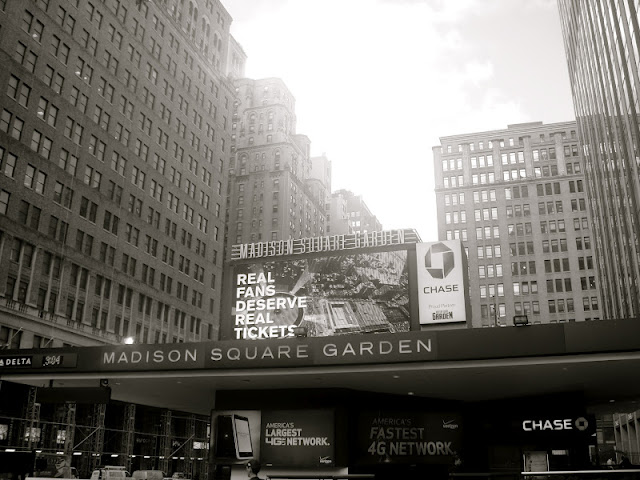 We walked around just taking it all in. Then, we took the train back to the airport. Nashville was just four hours away. The flight from Newark to Chicago was short and I fell asleep in the plane. Jet lag hadn't hit me yet. I've never experienced jet lag before so I wouldn't know if I'd gotten it or not. I did not. Dad did though. We arrived at Chicago not long after and had really hot tea at a café. So hot that I didn't drink it. I brought it into the plane to drink after cooling it down for half the trip. I'm contradicting that way. I don't like the cold but when it's hot I'd rather be cold, and when it's cold, I'd wish it was warmer.
This plane didn't fly that high so I looked out the window the whole time watching the buildings and cars get smaller and smaller until they looked like ants were living in them. 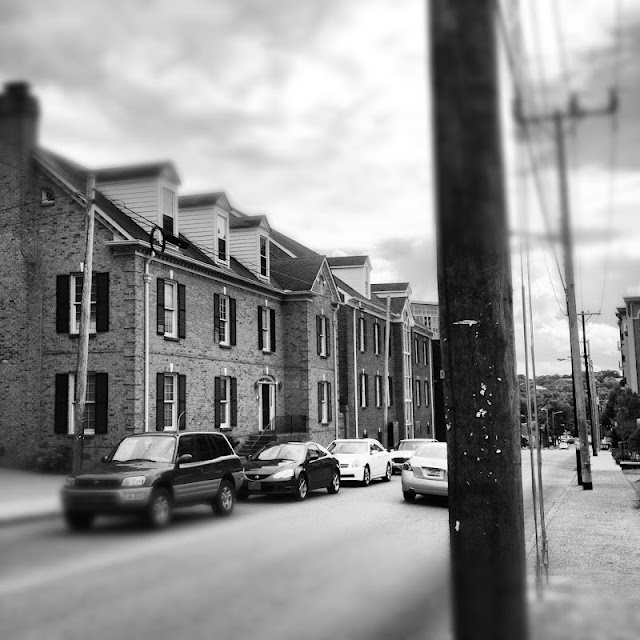 We landed in Nashville safe and really, really excited. There were guitars in the airport and music playing. We took another taxi to the hostel we were going to be staying at for the next ten days. It's called Music City Hostel. It was still under construction but it was awesome nevertheless. Looking out the window you could see the LP field and Riverfront, literally in the CMA fest itself. I was so excited! That night, a girl named Kelsey was performing at Hotel Indigo nearby. I've been a fan of hers through the internet for quite a while now.
Anyway, I read about it on Facebook and we decided to go watch her perform live. She is really good, even better live than I've heard her on youtube and her songs are really good. My dad told me to go say hi. He had to give me a little push because I was too much of a coward. I said hi and told her I loved her music and we talked a very little bit (I'm not good at talking. she was excellent at it though) Can't believe she's only 13. Then her mom introduced me to Jack Scott, the person who runs the writer's night at Hotel Indigo and told me about a bunch of other places I could sing at. 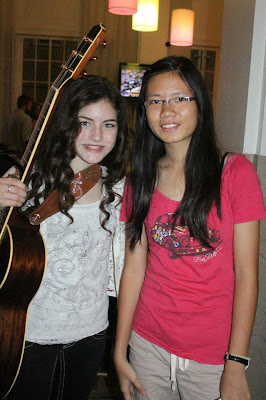 The Next four days were incredibly busy at the CMA Fest. It was hot, but not as hot as Malaysia though. It was amazing. Every corner you turned was filled with people. Every bit of silence filled with music. 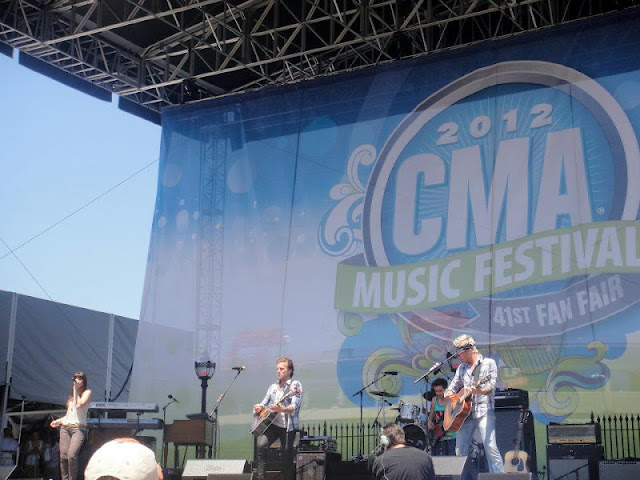 At night, when the festival stalls take a break, everyone heads to the LP field to... listen to MORE music. All the established singers perform there. Brad Paisley, Zac Brown Band, Lady Antebellum, Carrie Underwood, Faith Hill to name a few. My seat was really high up and on the first day, I walked all the way up there. Then on the second day, I met some really nice people at the fan photo line and they got seat way up there too. People call them the nose-bleed seats. We talked a bit and enjoyed the concert. 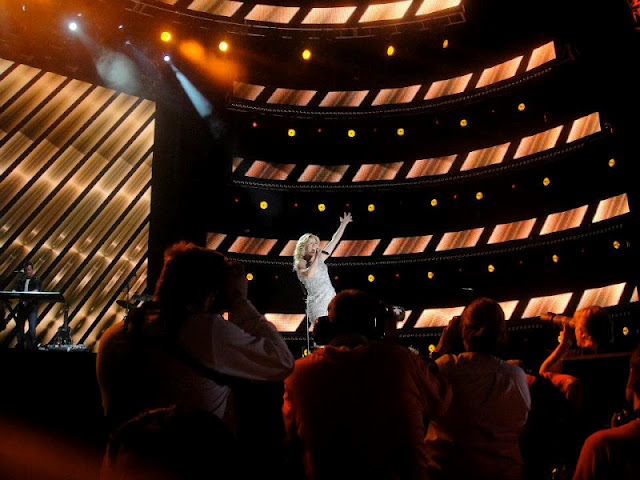 People here are really nice and its not that hard to talk to them either. We all share the same love for country music. The whole festival, although it was filled with people was really relaxed. I was wandering around and found a booth where you could sign up to sing and also stand a chance to win a guitar. I signed up and sang. Singing in the CMA Fest, it was really fun. I ended up singing there three times in that four days. 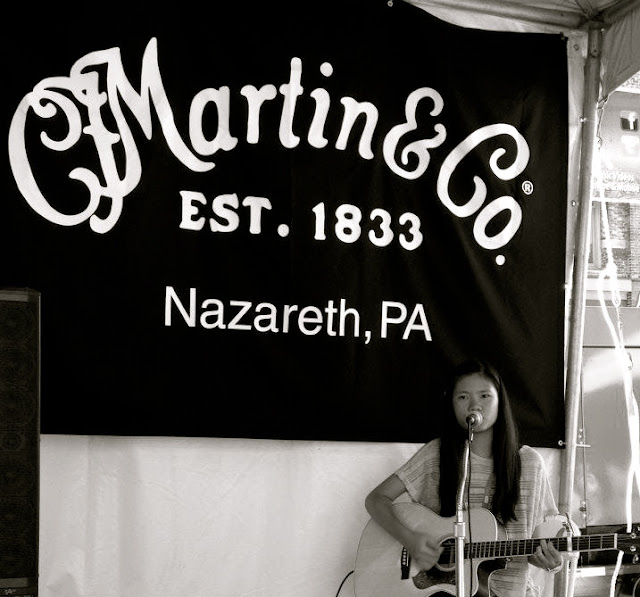 Kelsey introduced me to Jack Scott and he introduced me to Nolan Neal who asked me to sing at Hotel Indigo on the second day of the festival. I couldn't possibly say no. There was a band there from LA called the Voodoo Fix and I played their in-between set with Nolan. We took turns to play a song each. He is so good! 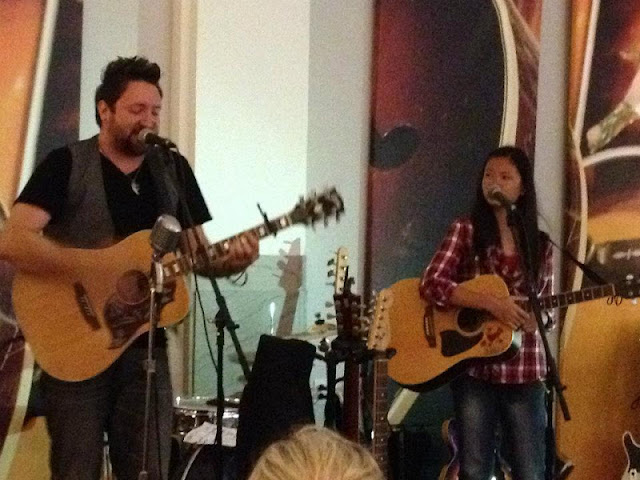 After singing at Hotel Indigo, we rushed to the LP field because Faith Hill was performing that night. Made it in time and it was just amazing!
I also got interviewed by GAC and Briana Barner, (a student journalist I think.) writing for a college project. It was an exciting experience. 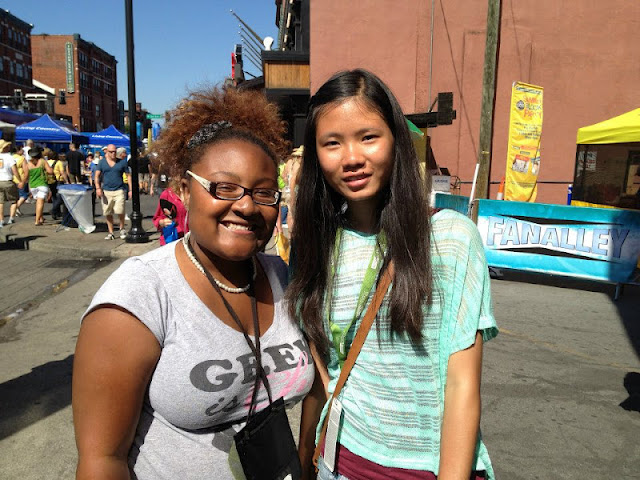 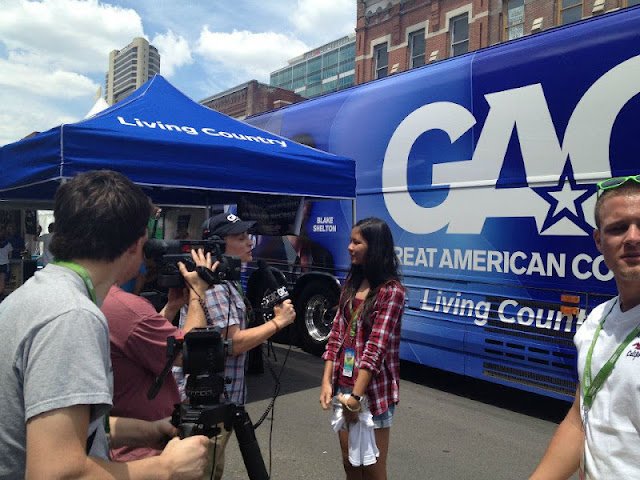 The festival ended and music was still around but not as much. I met so many awesome people including Kenny Chesney and many upcoming artist. It was a truly inspiring week for me and I think all the fans. We'd queue up in the hot sun to meet them. We bought their CD's, and it's nice to see that they are all so humble and nice, and that they appreciate it too. I got to watch the performances from far away online and now stand so close that when they poured water at the crowd, I actually got wet. So close that the sound from speakers felt like wind blowing through an electric fan. It was so exciting and amazing. It was surreal.

On Monday, I went to get my guitar fixed nearby because the neck was bent and we walked around Music Row a bit before going to the Bluebird Café. We went to try our luck there. Legendary, that place. Actually, it's just an ordinary café but the people, music and energy makes it so much better. It has a very nice feel to it. That day it was really crowded because it so happened to be the Bluebird's 30th anniversary. We got there one and a half hours early and the queue was already two shop lots long and it kept getting longer. I didn't get to sing there, but we did get to enjoy the show and watch all those talented writers sing. At least I got a ticket for next time! 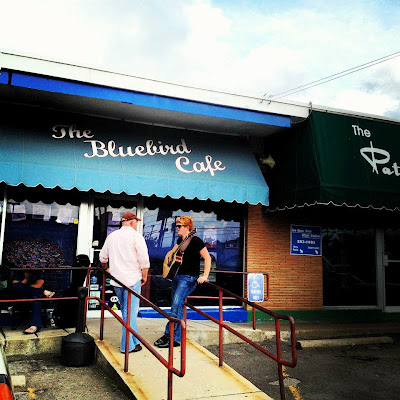 I didn't get to sing at the Bluebird Café, I can't say I'm not disappointed at all, but I know the chances were against me. Now I'm kind of glad I didn't sing there. Everyone was so good, I think I'm not good enough yet. Just watching and learning as much as I can is good enough. For now.

I got to sing at Hotel Indigo again yesterday evening and I was put together with two really talented teenagers around my age. We sang three songs, each taking turns to sing our own. I sang Tonight, that didn't go too bad. Then when it was my turn again, I sang Running Away. I completely messed up the strumming and my first thought was that I ruined it, everyone's going to hate my music now. Hopefully my last song would make it better. I sang Red, people actually liked it. Someone said it was the best song of the set! That caught me completely off guard. The girl who was in the middle, Haley Georgia liked my song so much she thought of recording it?!? She's really serious into this. Not like me, just playing for fun. She's actually here to make a record. She asked me if I could give her my song, but we'll see how it goes. I told her we could write together if I don't give her Red. She seemed to like the idea of that. I told my mom about it and she was like "So how?, you're leaving on Friday." and I'm like "It's not the end of the world, we have the internet." Maybe I could write for her, but chances are slim. We'll just go with the flow. It's definitely a learning experience.

Nashville is so beautiful. I can understand how people write songs everyday in this place. I could've swore I just stepped into a painting. 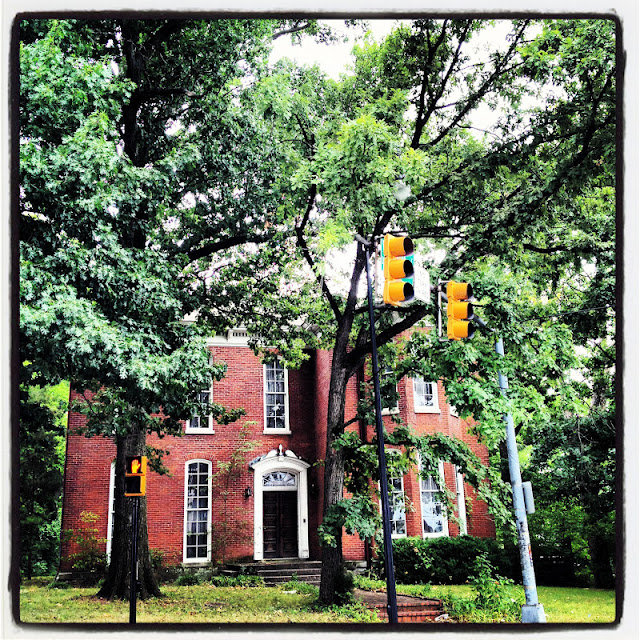 Thank you to everyone who supported me and helped get me here. Thank you for getting my little CD or coming to my performances, and even for your kind words of encouragement. I really appreciate it! 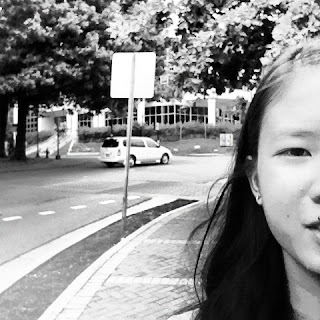