Eleven: You're too old to be so shy.


So. Story behind me learning this song and obsessing over almost every song sang by Daughter:
I probably forgot to tell you this, but I recently started guitar class. Most of you might argue that I already know how to play the guitar and have been playing for the past four years, but I my sister went for class first and then said "I can't do both acoustic and electric, it's too much. Can you take my acoustic slot?" and I said "Okay".
The first song I learnt in class was 'Hey There Delilah' by Plain White T's. It wasn't too difficult because it was actually one of the songs I learnt by myself before, but never got to finishing the song until recently. Then, my teacher let me pick a song to learn and I was so excited. Since I was obsessing over Daughter, (they are really awesome although most of their songs are pretty sad, they're still awesome) I asked if he could teach me 'Candles'. I printed out the tab and brought it to class. Class only lasts 30 minutes, so by the time my teacher listened to the song and tried to figure it out and by the time I tuned my guitar down (because the song is not in standard tuning) 30 minutes was up and we didn't even get past the intro.
Then, I had a performance (which was so much fun) and so I skipped class. After that was term break and so for three weeks I was guitar class-less.
Then on Tuesday, which is when I have class I remembered I had to practice. So about an hour before class I started frantically trying to figure out the song because I had not practiced in three weeks. I managed to figure out where we went wrong; on the 5th string, I should've tuned it down to G instead of leaving it at A and that seemed to solve all of my problems with the song.
I got to class and before I finished playing the verse, my teacher stopped me said that he doesn't know how the song really sounds and therefore couldn't continue teaching it to me. (But I learnt the whole thing!) He said that loading the video on Youtube was too tedious and I should bring the song with me next time. The thing was that I don't download music illegally and I have yet to buy their album because they don't sell them at Rock Corner.
I spent the rest of the lesson learning 'Rolling In The Deep' by Adele instead.
Posted by Amrita Soon at 1:43 PM No comments: 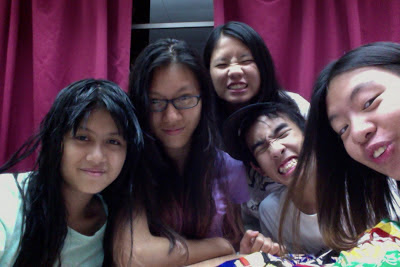 It's 3 in the morning. Good morning! Time to update you on the happenings of... CAMP.
To say that I enjoyed it would be a rather short and brief answer to say the least. Then again, as a long answer I could write you a book. Just to let you know, this was not one of those 'its-a-school-holiday-so-mum-shall-sign-you-up-for-every-possible-holiday-program-that-may-or-may-not-be-just-exploiting-you-of-not-only-your-time-but-also-your-money' situations. I went voluntarily. After my first experience of a camp that my parents didn't organise (which I had blogged about and carelessly forgot to click on the "publish" button but I remembered now, and you can read it HERE) I decided that I enjoyed the whole experience and would actually want to go again. I decided to call some friends to come with me, for it would guarantee way more fun that way. So almost all of us from the camp my parents organised came. When our forces combine, we have the ability to be a riot.
Because I had an audition to go to, I came late and conveniently avoided the awkward "Day 1" silence when nobody really talks to each other. First thing I had to do was to stick my face into a tray full of flour to get candy using only my mouth. Having my picture taken made it even more disconcerting. Okay, maybe I am overreacting a little. It was all really for good fun though.
Over the next few days, (inevitably) I had a lot of fun. And just like the other camp (if you haven't read my previous post...) it was packed full of activities. Puja and meditation was brief, and I really disliked meditation before this camp. I always found myself wandering corners of my mind during meditation that I didn't want to go to or getting distracted easily. Much to my surprise, I enjoyed this session quite a lot actually. We were instructed to visualise metta, or loving kindness as a light instead.
I made many new friends and many wonderful memories. I am so incredibly grateful to the committee and organisers for this camp, because I don't think I would be who I am now without these experiences.