It was a lovely trip to Ipoh and Penang. It was an amazing experience performing at the Penang Island Jazz Festival.I am currently (well, not so currently because it is taking me a week to finish this blog. Sorry) reuniting with my computer, whom I haven't seen in days. Internet was widely available in Penang, much to my surprise so I did not experience much withdrawal symptoms. Ha. We started our journey to Ipoh before heading to Penang. After a lot of scrambling and last-minute packing, we left the house behind schedule. As usual. With music blasting through my headphones, I fell asleep and woke up in Ipoh. I wondered how much longer I could just fall asleep and arrive at my destination magically... We had dinner at that vegetarian sushi place that we always go to with my grand aunt and grandmother and then watched TV. Ipoh is either two things: eating, or watching TV. Our grandmother thinks we are deprived of them both. 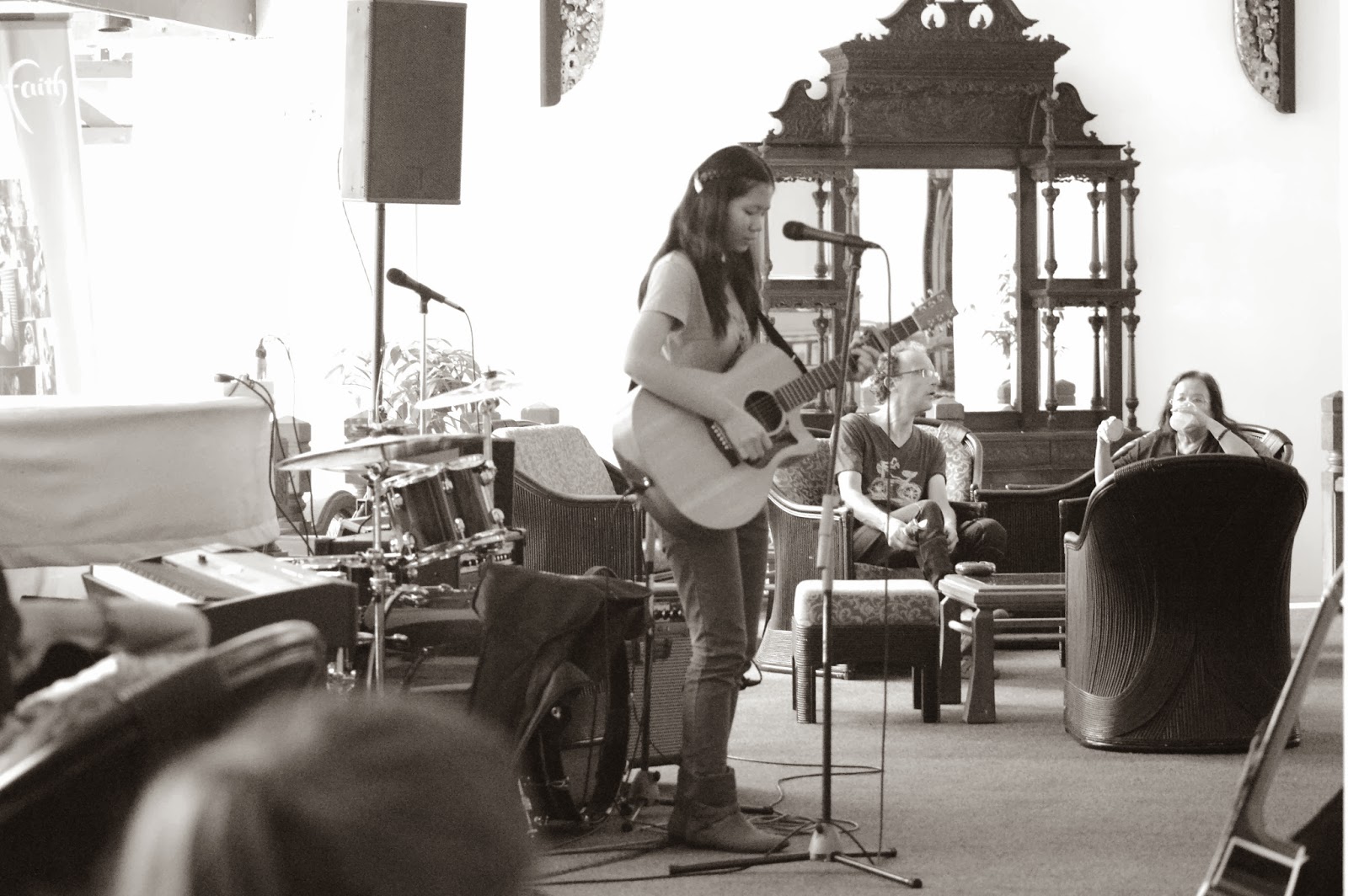 On Friday, we headed to Penang. Sam, Arian and I sat with our faces glued to the window, excited to see the sand, rocks and the ocean. You'd think we lived in the city all our lives and have never been to the beach, but we have.
I got to stay in a lovely hotel room with my siblings and have meals at the hotel, (which were in unbelievable large portions) and also attend the festival events. I have never had a festival tag with my name on it and the word “Artist” printed at the bottom of it. It was awesome.
I'm not a jazz artist, so I was scheduled to perform at the fringe stages Bayview Beach Resort during the day. I was quite nervous because 1) I have never performed in Penang and 2) I have never performed at a festival like this. But as I spent more time there, I realised everyone was really supportive and people came up to me and told me they really liked my music. Me, the girl with the cowboy boots singing about life and love. I was genuinely surprised, and I really appreciated it that people listened. After my performance, it was a blur. I took pictures with people, posed with my guitar and talked to a few more people. I was really nervous. This had never happened before. What a rush. 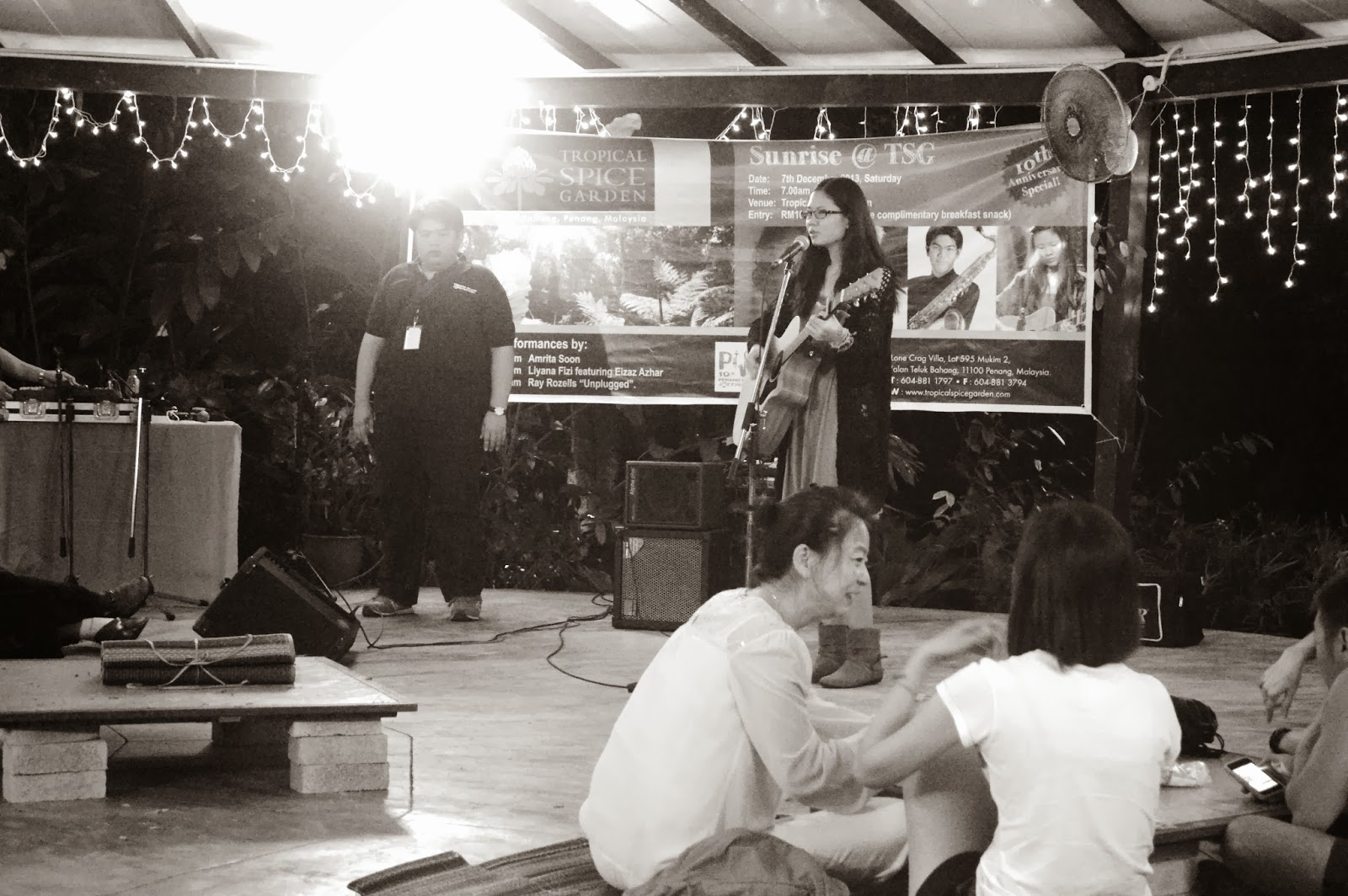 On Saturday, I had a performance at Tropical Spice Garden. It was the sunrise show so you guessed it, it happened at sunrise. The people I told about this performance were shocked at the time of the event and my sister chose sleep than to attend but I have not been more excited to wake up at 5am and sing at 7. I was the first performer, and the sun had just risen over the horizon. We were set amongst the trees and there were fairy lights all around. It was magical! And right in the middle of the little tent-area was a tree. I felt like I was in a treehouse. And I love tree houses. I was worried no one would come for my set because it was so early in the morning, but it seemed that Penang people are morning people.

I had never performed with a giant picture of my face behind me before. I have also never performed this early. I also had never performed on the same stage as one of my heroes, Liyana Fizi before. I mean, even to be mentioned in the same sentence. Wow. It blew my mind that that morning happened. I got to meet her afterwards and took a picture with her and her guitarist and also with the saxophone player. She said “here hold this." She said, handing me a packet of sandwiches. "It would be like we're going to have breakfast!"And that was how we ended up taking pictures with our food. 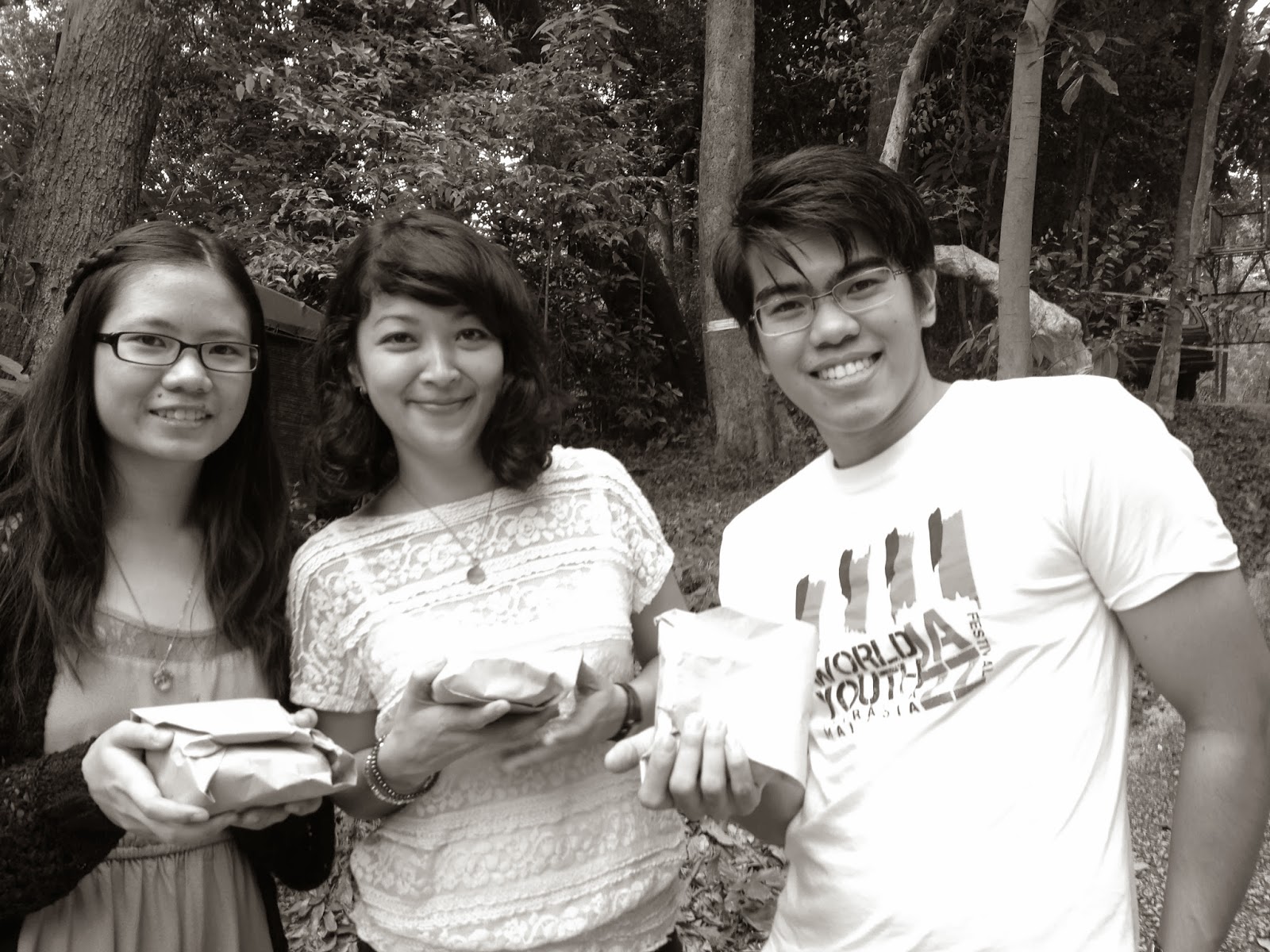 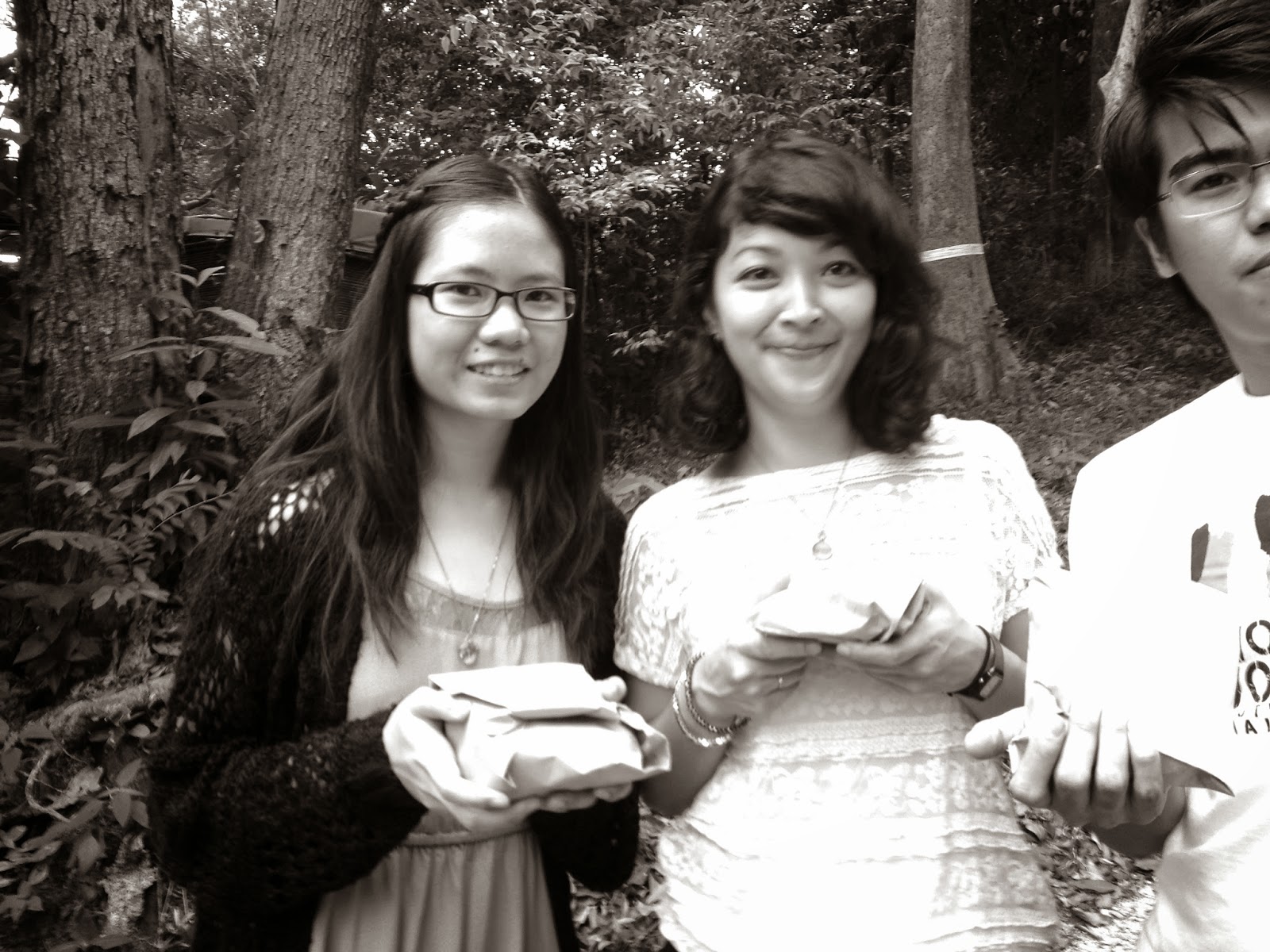 Bihzhu, who performed at the main stage asked me how I was. I said “Okay”And she was like “Only okay?” Well, that is my standard answer for how I’m doing, but she meant how was the experience, the setting, the ambience. Definitely more than an “Okay”. It was a dream. 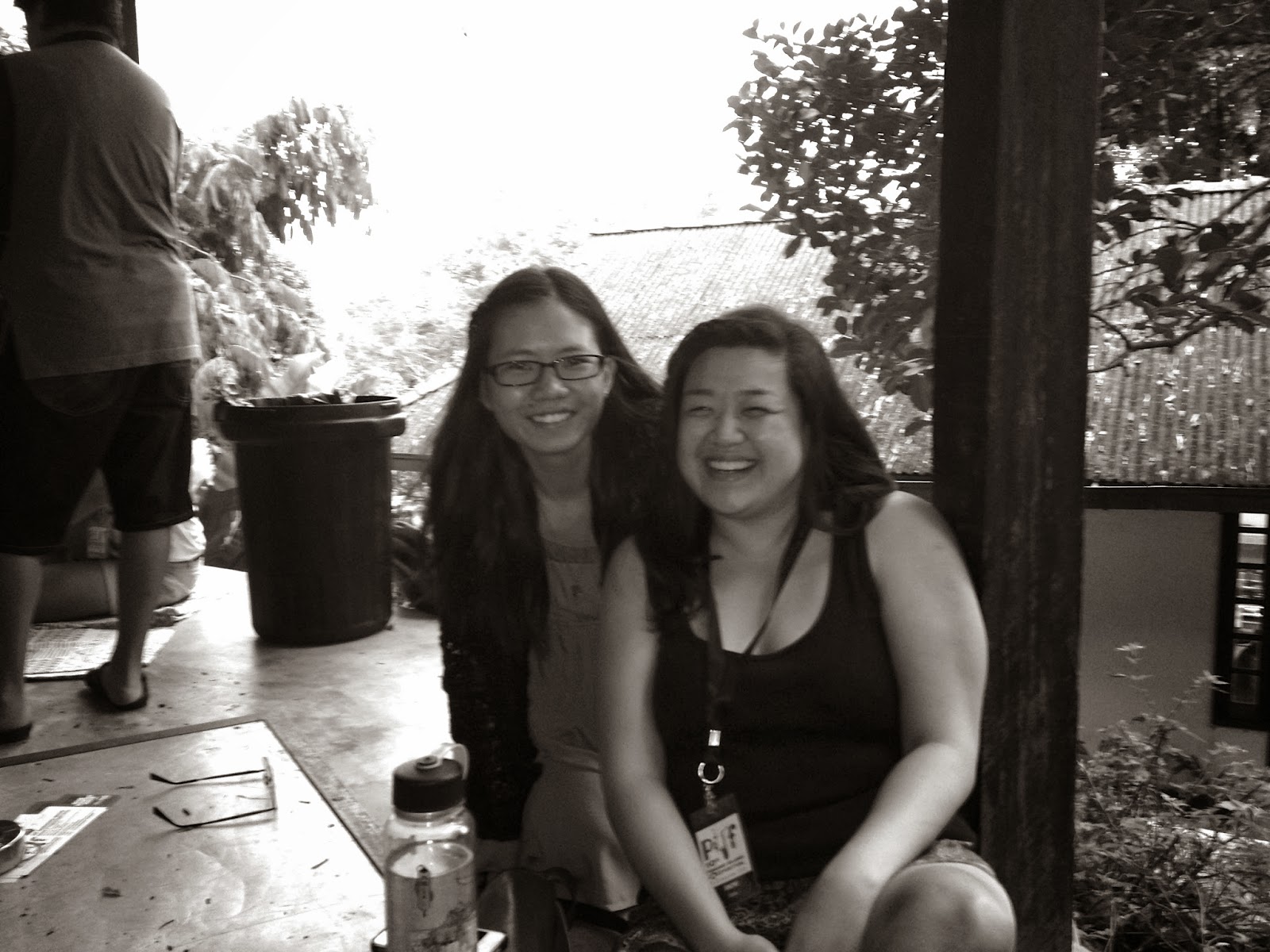 I attended a workshop by Martin Taylor and Alison Burns with Bihzhu. Mum, dad and Arian left me alone for a while. I enjoyed my time by myself without them and talked to a few people, which was nice. I am rather quiet and not very sociable and you could blame the homeschooling, but I think it's just me because I've met homeschoolers as sociable as anyone else. Alison talked about vocal warm-ups and singing while Martin talked about guitar playing.

After the workshop, I took the shuttle van back to Bayview. It was like a school bus. This whole thing was like an adventure for me. I got back to our hotel room and ate my breakfast/lunch. Then we went swimming! I've been wanting to go swimming since we got here, but I was performing while Sam and Arian went. We swam for a while until it was too freezing cold for us to continue. We watched TV- or more accurately, stared blankly at the screen for a couple of hours before I decided to go downstairs and listen to some of the bands performing today. The getting up at 5 am finally hit me and I was feeling sleepy, so I went back to the room. 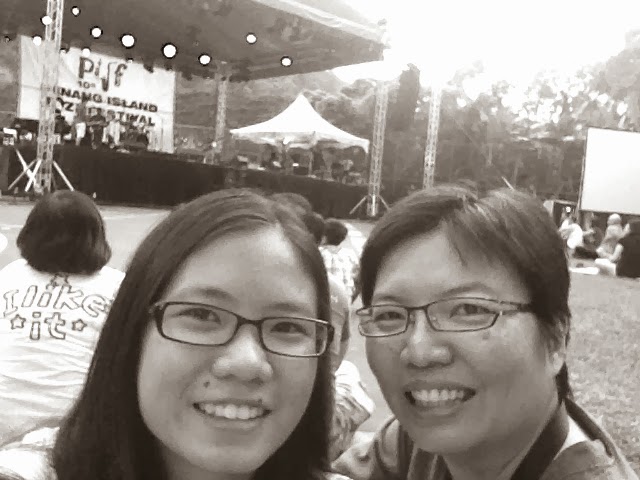 In the evening, mom and I went to watch Bihzhu perform. It was on the main stage, kind of like the LP field at CMA Fest, but on a smaller scale. I wasn’t sure if we could enter, so I asked the person at the entrance and showed him my “artist” tag. That was when I realised the magical power of that little tag- It could get me free food at the hotel AND entrance into the concerts. Free food was a waste for me, because I forgot to eat breakfast, and dinner was huge, so I kept it for lunch the next day.

I had one last performance the next day at Bayview Beach Resort. I thanked the people who let me perform there, and the organiser himself; uncle Paul. They were all so nice and welcoming even though they have been doing this for 10 years.
My grandmother made a surprise visit to our home. And mom could not contain her shock. We were not prepared because normally when she visits, we'd spend the week intensively cleaning the house but this time we were away and the house was a mess. She first came in and asked why our grass wasn't cut. There was no way she would believe us if we tell her it was intentionally left that way. As usual, she tried to talk me into becoming a doctor or a teacher. There's a lot more pressure on me because she knows I can study if I wanted to. In primary 4, I got first in class and she was delighted but she would be happy if my sister became a hairdresser.
I had a gig at Merdekarya and we brought my grandma along. She has never watched me perform ever. I'm so glad she came. Well, she didn't really have a choice but still. 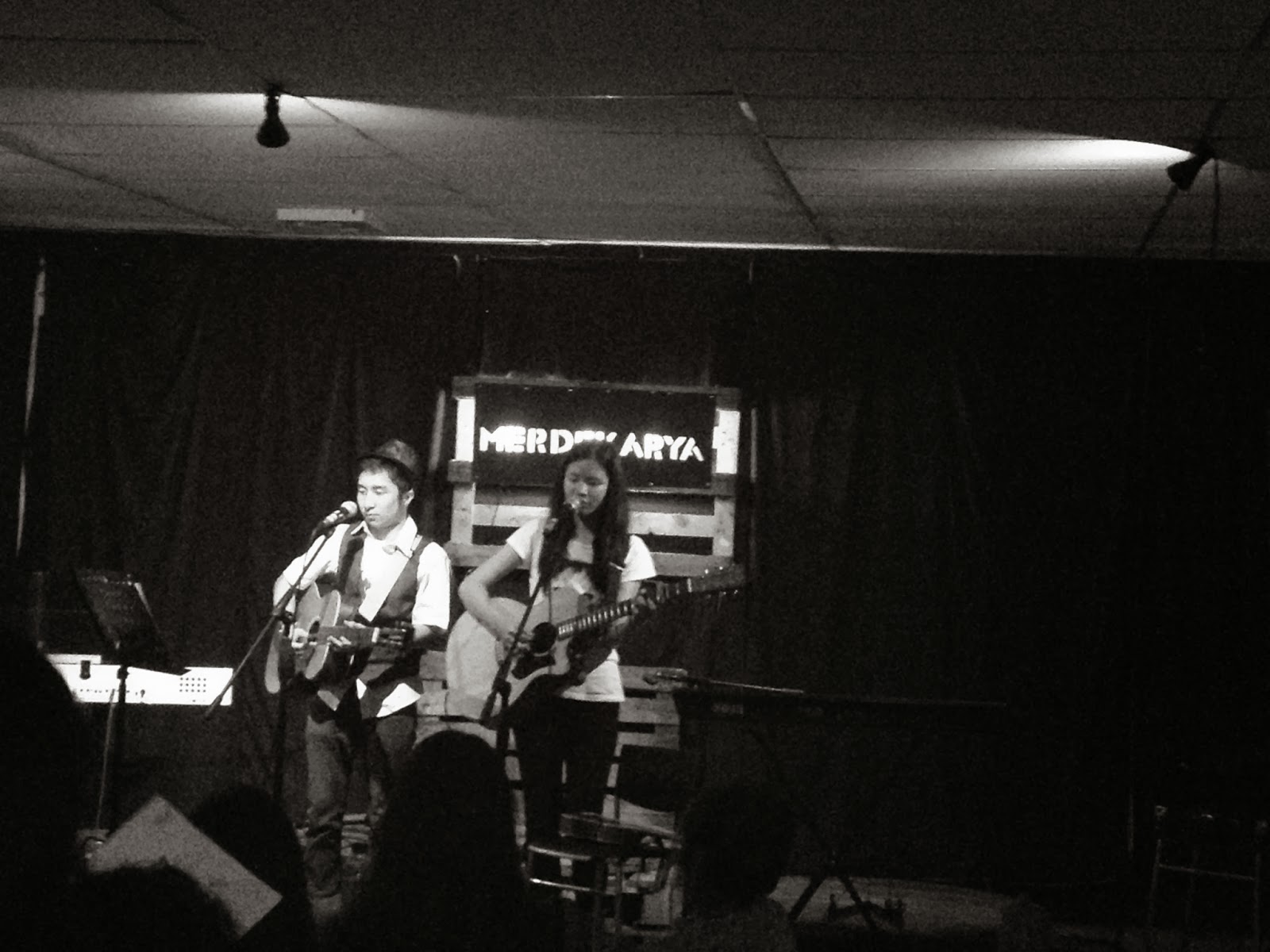 I also got to sing with the amazingly talented Devon C, who organised this and gave me the honour of opening the show. He has the most amazing voice and we sang "Let Her Go" by Passenger together.
So after the show, my grandmother was like "well, it's alright.." 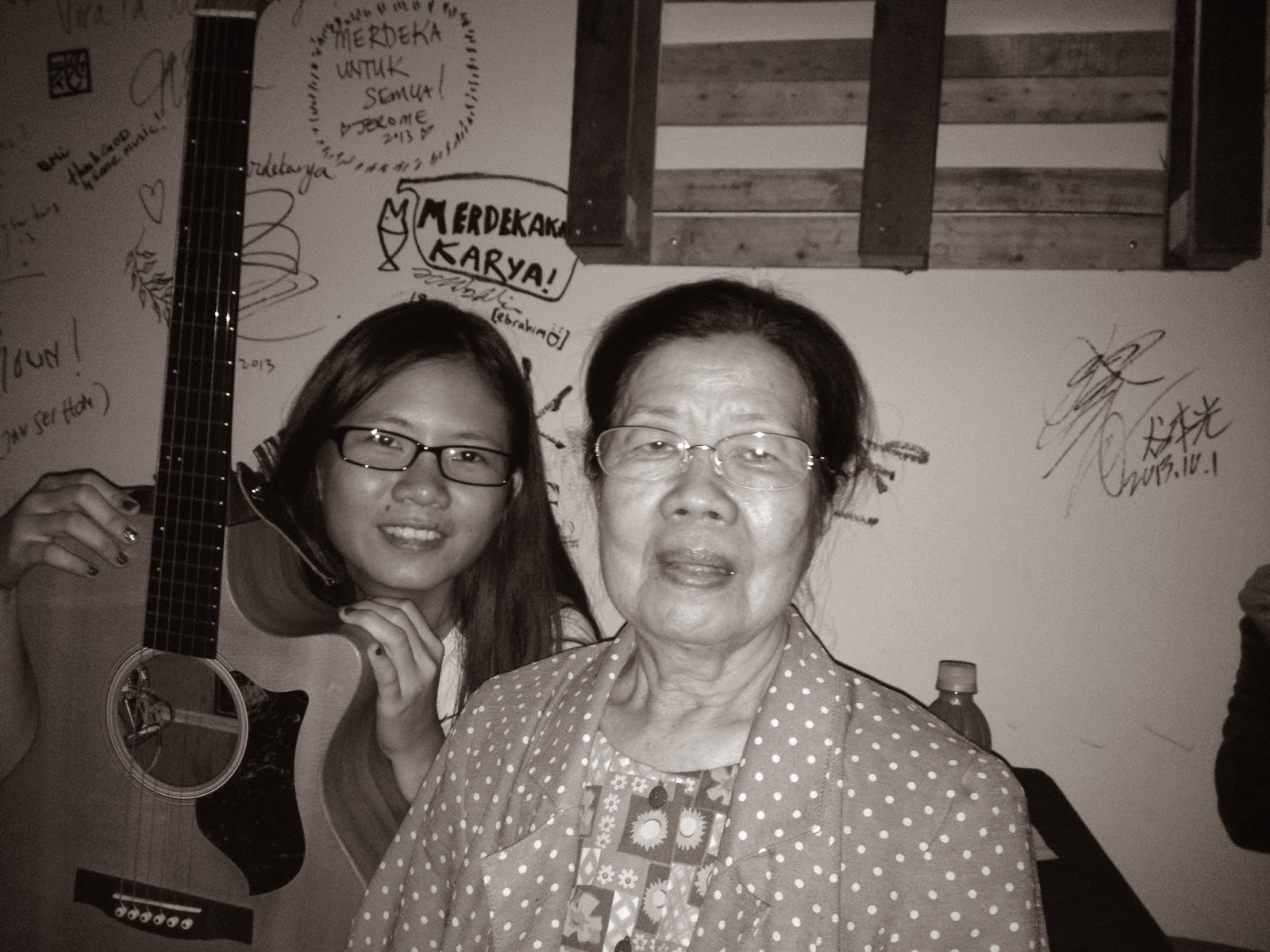 The next day, we took grandma to the recording studio to see what I actually do with my time. When she asks, I normally don't know what to tell her. I've played the "I don't know" card far too many times when she asked me what I wanted to do with my life so now I'm just showing her. My song for the Rock for Ronan album was almost ready and we could go to the studio to listen. I was really happy with the way it turned out and grandma liking the song was an added bonus. I've already performed the song a few times here and there, and I can't wait for you to hear it!

While I was in Penang, I found out that my song 'Red' is nominated for 'Best Pop Song' at the VIMA Awards!! It is going to be pretty tough as I'm up against so many talented artists, but I am just thrilled to be nominated. Voting has begun, and it took me quite a while to realise that it had already started: http://goo.gl/UKVaZk If you're not quite sure how to vote, you can find out more here: http://bitemymusic.com/how-to-vote-for-vima-malaysia-2014/ It is now almost 1 am and I really should be going to bed, but I have to finish this blog before I leave for camp. Now that I'm done... goodnight, and see you in a couple of days! Thanks for all your love and support.
Posted by Amrita Soon at 12:40 AM