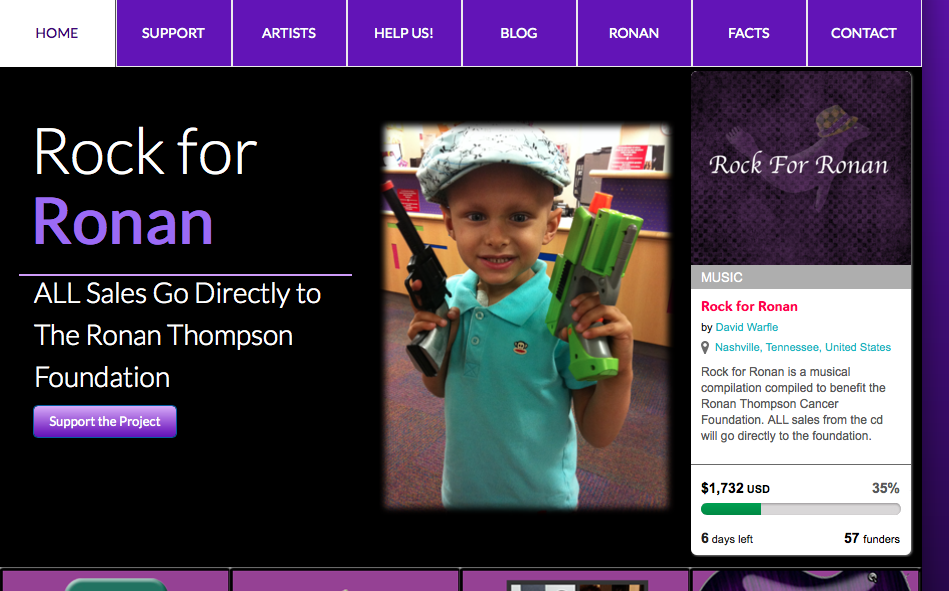 As some of you may already know, a song that I wrote will be included in the Rock for Ronan compilation album. All sales will benefit the Ronan Thompson Foundation to try and help fight childhood cancer.

Rock for Ronan is a musical compilation currently being compiled to benefit the Ronan Thompson Cancer Foundation. All sales from the cd and online downloads will go directly to the foundation to continue research and support of childhood cancers.

To be honest, I didn't know much about paediatric cancer much before hearing Taylor Swift's song 'Ronan'. That song made me want to find out more and it made me want to help too. I was quite oblivious to all of this but as I researched further, I was devastated by what I was reading. These children suffer so much, fight so hard and sometimes they win, but a lot of the time they loose their lives. Neuroblastoma, which is the cancer of the specialised nerve cells are usually diagnosed in children under the age of 5. Can you imagine being so young and having to face something so terrible? I have never cried so much for people I have never even met.

I really wanted to help as much as I could, but I'm just a teenager. I don't have a job, I still live with my parents. What can I do? Maybe it’s because I have yet to experience the brutality of the real world that I still believe that I can make a tiny difference in this giant, immensely populated world. My parents taught me that you don't need to have a lot to be able to help someone. So as I was scrolling down Tumblr, I came across this project. Rock for Ronan was looking for songs to put in their compilation album. I was very excited and got to work immediately. I had many half-written songs but I wasn't happy with what I wrote because I felt like it wasn't sincere enough. It worried me that I wouldn't be able to tell their story accurately enough. It took me a a lot of writing and rewriting before I finally finished the song.

The next challenge was finding a producer and a studio who would want to work on this with me. I had met Abraham at an open mic a couple of months ago and he had invited me to his studio once. It was quite last minute when I asked him, but he was willing to help me record the song and I am so, so grateful for his help.

We set up a meeting face-to-face and discussed the direction of the song. I have never done anything like this before, so this was very exciting to me. Soon, we were recording guitars and vocals. A few other instruments were tracked and now we're almost done!

My grandmother (mom's mom) told me that music can't help people. She says I should do something with my life that will actually benifit someone. Like a typical Asian parent/grandparent, she told me that I should be a doctor or a teacher. I know that trying to live up to her expectations is a useless pursuit so I might as well take as much of her advice as I can and do what I feel is right because what she doesn't understand is that music does and can indeed help people. It helped me. Writing songs helped me get out of my own head and let me say what I wanted to say. This project is allowing me to go beyond my own feelings and stories and letting me extend it out to hopefully help. Even if it’s just a little.


Right now, it's the last few days of the campaign. We are trying to raise $5,000. We are really grateful for all the support so far, but unfortunately we're not even halfway to our goal yet. Everyone part of the project is trying our best to promote this, but we really need your help. Donating $5 or RM 16, can get you the digital download of the album. $25 or more gets you the digital download as well as the physical copy of the album.

If you are not able to donate money, it would really mean so much if you would be able to help spread the word about this project. We are spending a lot of time on the internet, and things we say are seen by more people these days. It is easier to say something on Twitter and Facebook and have a people listen so I hope you can help us in any way you can.

Thank you for reading this. And thank you SO much for all your support, even if it was just sending a little prayer or reading about paediatric cancer. It really means a lot.
Posted by Amrita Soon at 8:44 PM