I find that I'm caught in-between. In-between who I am and who I want to be, where I am and where I want to go. At 18 I'm not quite an adult, but not quite a teenager either. It's a little awkward sometimes talking to grownups and feeling a little left out, but then still feeling a left out talking to teenagers too. So I guess I shall talk/write to you.

I've been neglecting this blog lately (sorry!) trying to keep up with writing in my journal everyday. I'm in a car right now, stuck in traffic. There always seems to be traffic everywhere lately for some reason. It's the 7th of March already and February just few right by. I've got so much to tell you and I'm trying to figure out where to start.

I had one of the best birthdays I've had in years. I didn't have a big party or anything, but I did have two mini-surprise-birthday gathering- type situations. My mom decided to surprise me at my own open mic, Treehouse Open Mic. One funny thing though, my mom and sister aren't that good at keeping secrets. At the basement in Bangsar as I was unloading the amps and stuff, I saw the cafe owner, brother Ong. He was carrying a cake and walking, almost skipping merrily back to his cafe. I assumed it was just another cake because he owns a cafe and they sell cake at the cafe. But then my sister was like "don't look! Turn away! Don't say hi to him." And that's when I knew what they were up to. Mom even got the featured act, Devon to sing me 'Happy Birthday' during his set which was a little embarrassing. I don't like having attention drawn to myself, but for some reason I'm alright with singing in front of people.

The kids at CLiC threw me a "surprise" party too. They love birthdays. It doesn't even have to be their own birthday. They were so excited that they told me about the surprise party they were going to throw me and completely defeating the purpose of a surprise. I thought it was so cute. They made me a cake, and gave me little handmade gifts. I felt like a kid again. Things cake presents often get overlooked or seen as childish when you become a teenager for some reason.

I also launched a GoFundMe campaign for me to raise money to go to Nashville. It also acts as a pre-order for my EP which will be sent out when it is finished. The response I got so far has been pretty great. People are sharing it and getting the word out. If you were one of them, thank you. You're too kind.

And if you would like to contribute to my project but you don't have a PayPal account or are having trouble with an online transaction, you can message me on my page and I'll give you details of how you can do an offline contribution.
This only applies to Malaysia only, unfortunately.

I'm hoping to spend a longer time in Nashville this time around to learn more and hopefully perform more as well. I did my first Ticket To Nashville gig for the year with a few of my friends who want to go to Nashville too. The response we got from that show was really amazing, and we performed to a room full of people! Hoping to do another soon :)


The Rock For Ronan album was released on the 25th!!
I can't believe I got to be a part of this project. I hope we raise enough money for the foundation. Here, I did a piano version of my song 'Goodbye' for the release of the album.

I went into the studio to record another song for my EP. It's going pretty well so far. I've got a lot of time in between to practice my singing and practice patience as well. There's a lot of waiting during this process as musicians are very busy people. I've got a lot to work on with my vocals and I hope to start vocal lessons soon.

I also gave a talk in February. Talk about nerve-wrecking. I'm not good at talking in general, let alone speaking in front of many, many people. It was for a homeschooling forum and I got to share a session with Karen. Our topic was "Confessions Of A Teenage Homeschooler". At first, my mom told me that it was going to be a short Q & A session at a small homeschooling meet but she failed to mention that the event itself was called the BIG homeschool meet. I barely slept that night because I was preparing and rehearsing for my short 10-minute talk.

There were about 70 people in that room. I didn't manage to read everything I had written in my notes because I was so nervous I forgot where I was reading, so I improvised a little. At the end of it, I think I did alright. It made me feel a little more confident about speaking. Emphasising "a little". But the confidence is often short-lived.

Oh, AND I also did something rather outrageous. Outrageous for my standards. I got my hair dyed. Just dip-dyed, not the whole head, but I am quite happy with it. I sort of got peer-pressured into doing it. I was very hesitant. I'm not the kind of person who just does what they feel. I need time to contemplate on things and consider all my options. But my mom and sister on the other hand, go by the "do first, then think" philosophy and they pushed me into the hair saloon. What a sight it must've been. I mean, it's not that the forced me to do what I didn't want to do, because I did like the idea of having my hair dip-dyed sometime, but not so soon. I hand't thought it through enough. The hair dresser was on their side, of course.

So they finally got me to the chair and I decided on a dark purple shade. Like the colour of our neighbours bush the way my sister and I describe it. The feeling of fear I had in me measured similarly to when I am at a dentist. It was quite a traumatising experience and I'm only just starting to get over it.

First, they splat on this mint-green paste onto my hair and wrapped it in foil. It smelled weird and felt a little warm. I was then left to stare at my own reflection on the mirror for half an hour. I brought out my knitting stuff and started knitting to keep calm. When they unwrapped the foil, I swore I saw steam coming out from my hair and when they rinsed the paste off, my hair was blonde! At this point, my heart was pounding. They then put another round of paste on my hair and I sat there for another eternity before I could rinse it off. They washed my hair for me too. I don't know why, but I always feel like it's weird having somebody wash your hair for you. It always seems like something you can do on your own.

Anyway, my hair is now a little purplish pink/red.

I was also invited to perform at an event called Play It Forward, a charity music show organised held in Black Box, Publika. It was an awesome lineup with Prema Yin, Bihzhu, Fazz, to name a few.. And then there's me... 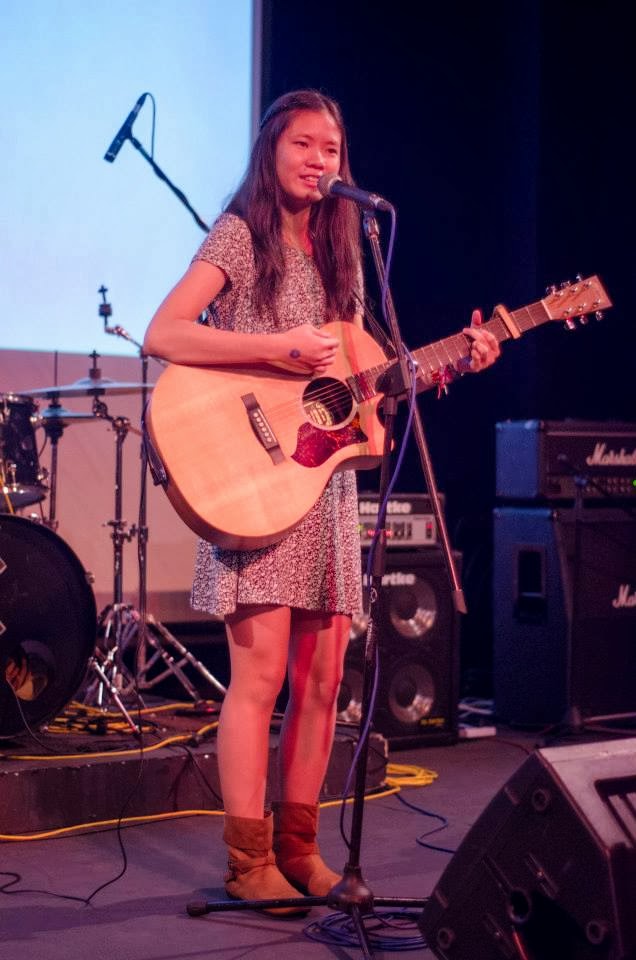 Pretty much a nobody, I got to open the show. It was cold in the Block Box, plus I was nervous (and I found that I my hands tend to tremble when I get nervous) but I managed to get through the short set I had prepared and really enjoyed it in fact. Oh, it was so much fun! I know I say that a lot, but it really was. You can get used to playing to empty rooms and people who don't really listen. Slowly, they start listening and that feeling is awesome. But this was different. I wasn't in a small cafe with tables and stuff, there were seats and real tickets and everything. The whole deal. 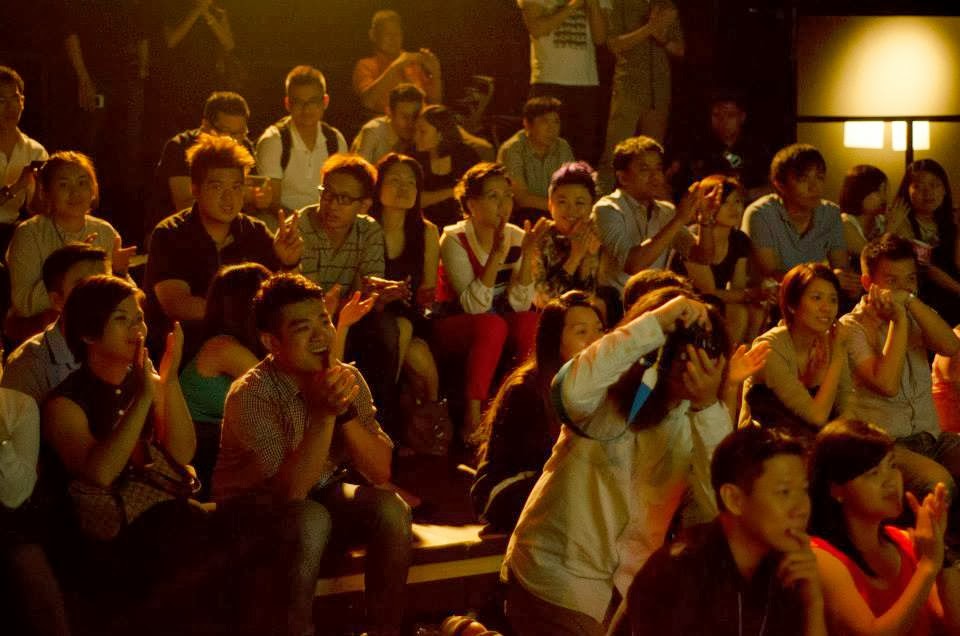 I was honestly so surprised and touched when people clapped so loudly after each song. Maybe it was because the event started late and I was the first to perform, so they were obliged to be excited. Either way, I am so grateful to have gotten to be there. I talked to people during their intermission and despite my awkwardness when it comes to conversations, I managed to carry a decent-ish conversation. A few people even came up and told me that they liked my performance and that made me smile :)

It has taken me about three days to finish writing this blog as I'm writing between the usual running around, singing, baking, dancing, ice-skating, but thank you so much for reading till the end of my random ramblings.