Has it only been 7 days since we got here? I've got so much to tell you, but days have been so busy that I'm trying to find time to write and journal every day. So far, I'm still stuck at Sunday. Monday marked the end of our first week. Its friday now so... 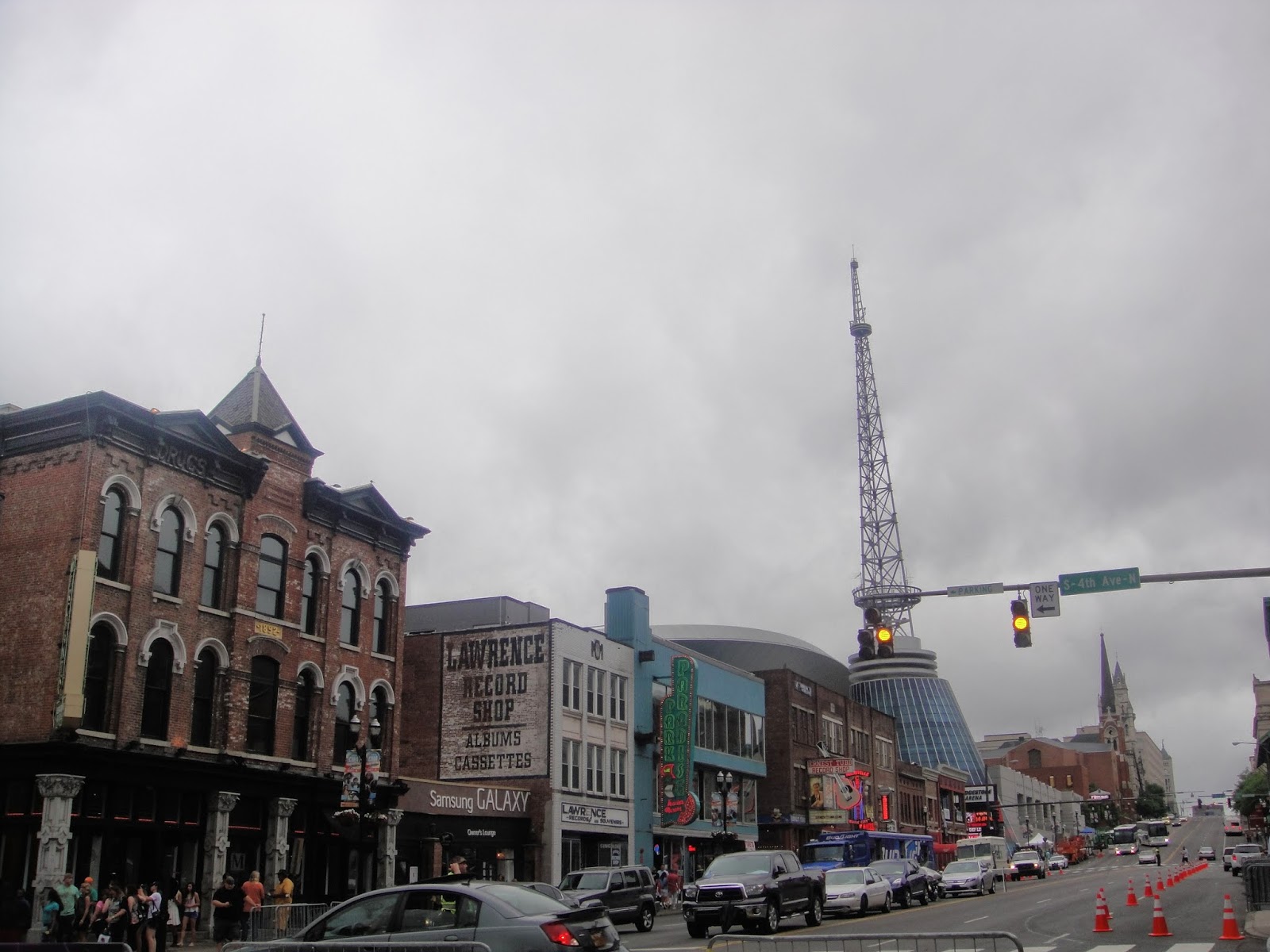 The sun played hide-and-seek with us for most of the week. It rained and then it stopped, it rained and then it stopped. I've been volunteering at the hostel, and I'm enjoying it a lot. Maybe I'm enjoying it more than I should. I fold the sheets, clean the floor and stuff like that. I learnt that its not always about doing what you love, but its also about loving what you do. 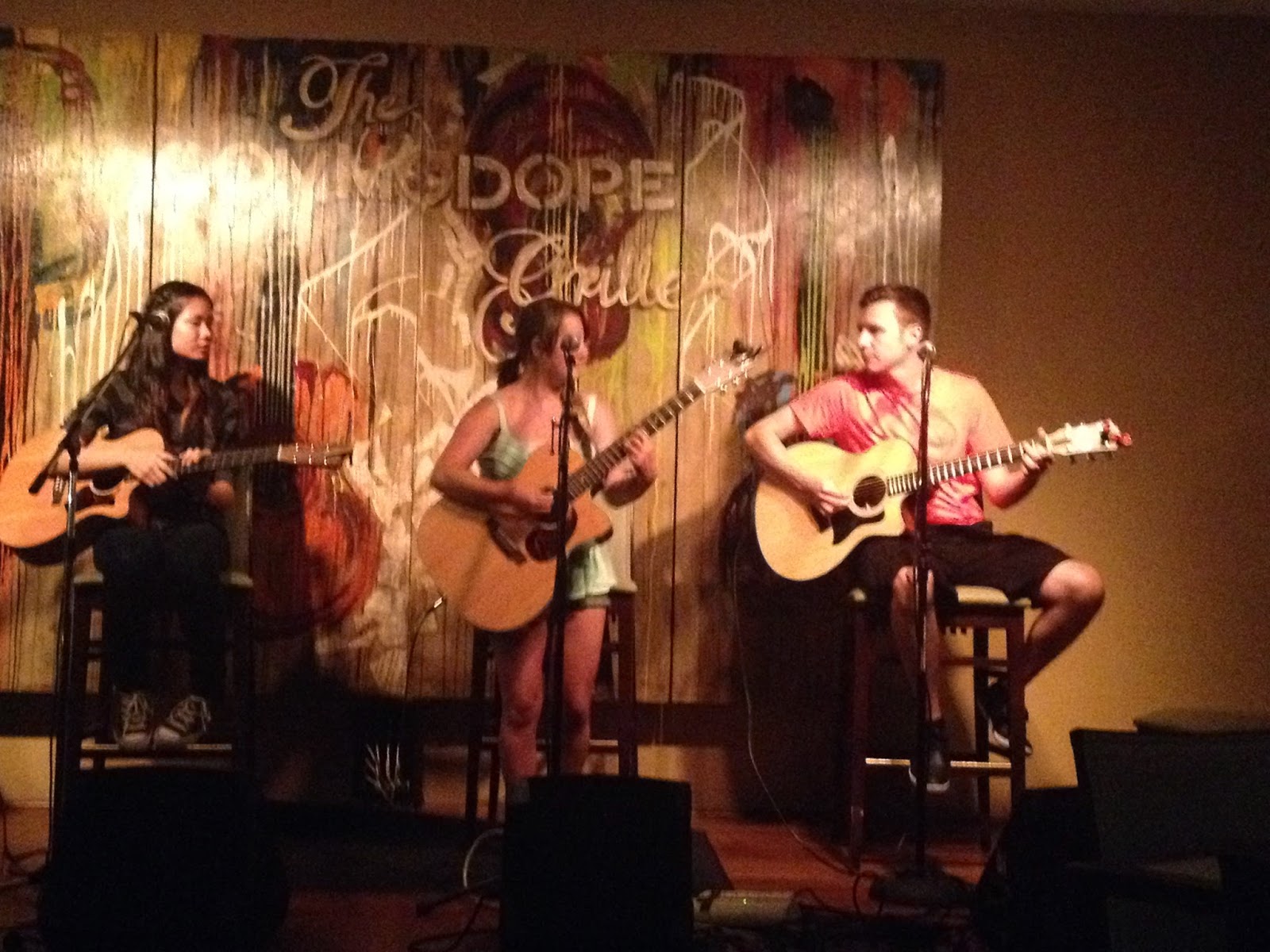 On Wednesday, a day before the festival, my mom and I went to Commodore Grille to try my luck at the Debi Champion's writers night there. We got there really early because we had planned to walk but Kodi, the person who was training us on working here offered to drive us there. While waiting we met a 'singing concierge' Tommy. He is a songwriter and, he talked to us about the music industry and gave us advice on what we should do. I ended up being the first to sign up.
If it is your first time playing here, they make you wait until everyone who is scheduled to play is done. It's like they are testing your patience, but at the same time you'd get to learn a lot about songwriting. There were 7 rounds the night, and it was 3 hours of awesome songwriters play.
I was in the 8th out of 9 rounds and I was so nervous. I met these two singer/songwriters, Camille and Anthony from New Jersey. It was their first time here too. Their songs are amazing, and you should totally check out their music: https://www.facebook.com/camilleperutomusic (I can't seem to find Anthony's page). At the end of the night, I thanked Debi and she gave me a hug. She is so nice and kind. We walked home and got home pretty late. I was too exited to sleep.
The next day was the start of CMA Fest. It was really fun. After I did my hours at the hostel, I walked over to the festival. Through all this, I'm learning so much about music and everything else too. I'm learning how to speak more, because everyone here talks a lot. They greet you with "Hi, hows it going?" or "Hey, how are you?" and sometimes, I don't even know that person but its just a general greeting. 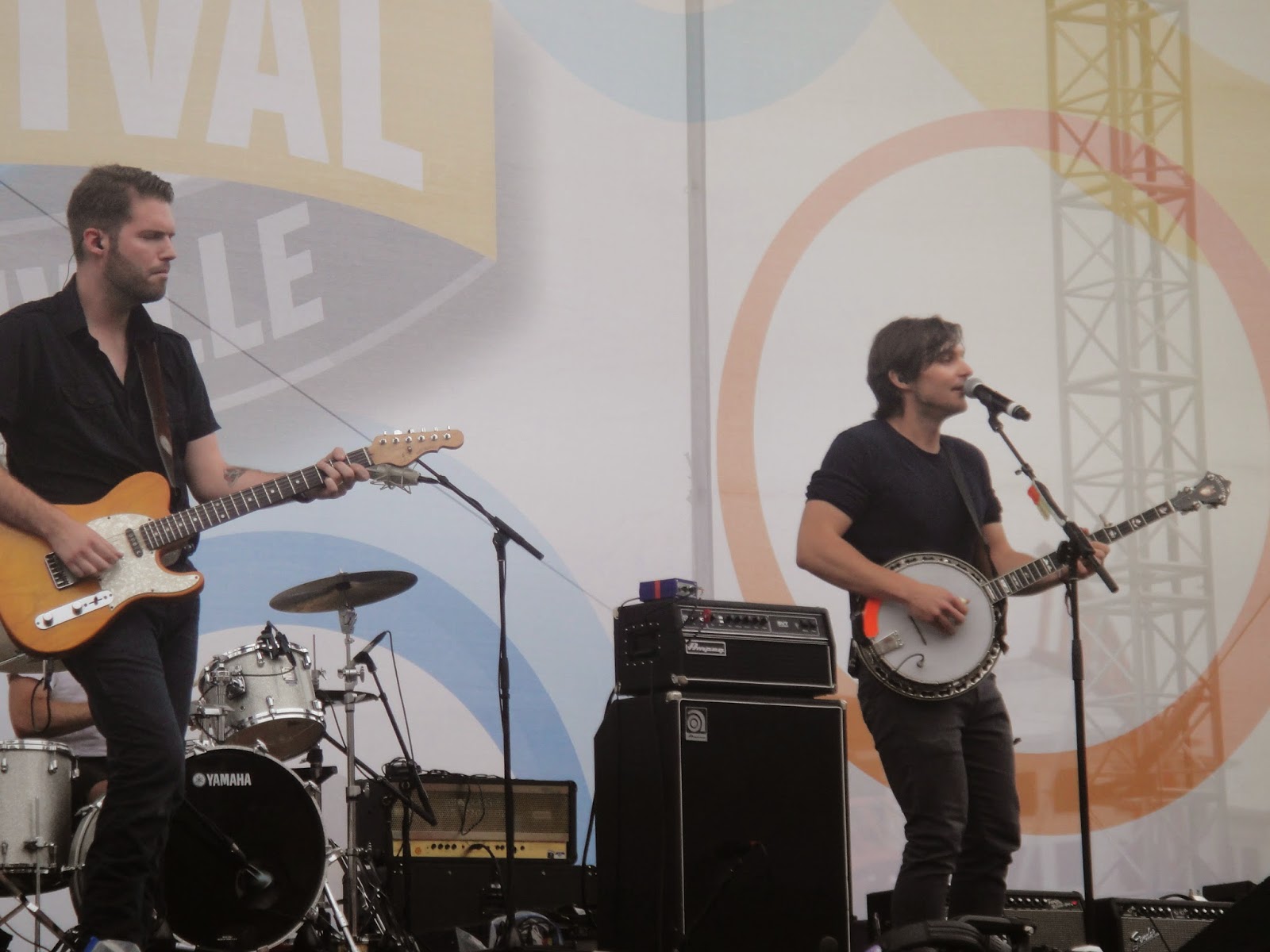 On the first day, I got to see Charlie Worsham and Cassadee Pope perform at riverfront. He even came down and took photos and interacted with the people in front during soundcheck and Cassadee Pope is even better live than on TV, if that is even possible. I also went to the Martin Guitar booth where I sang at two years ago, and saw the same people I met then! They even remembered me, which I find very surprising because thousands of people pass by their booth each year. I sang a song and they gave me a t-shirt. They told me to come back again, and because my mom wasn't with me then and I wanted to show her this booth, I told them I would. 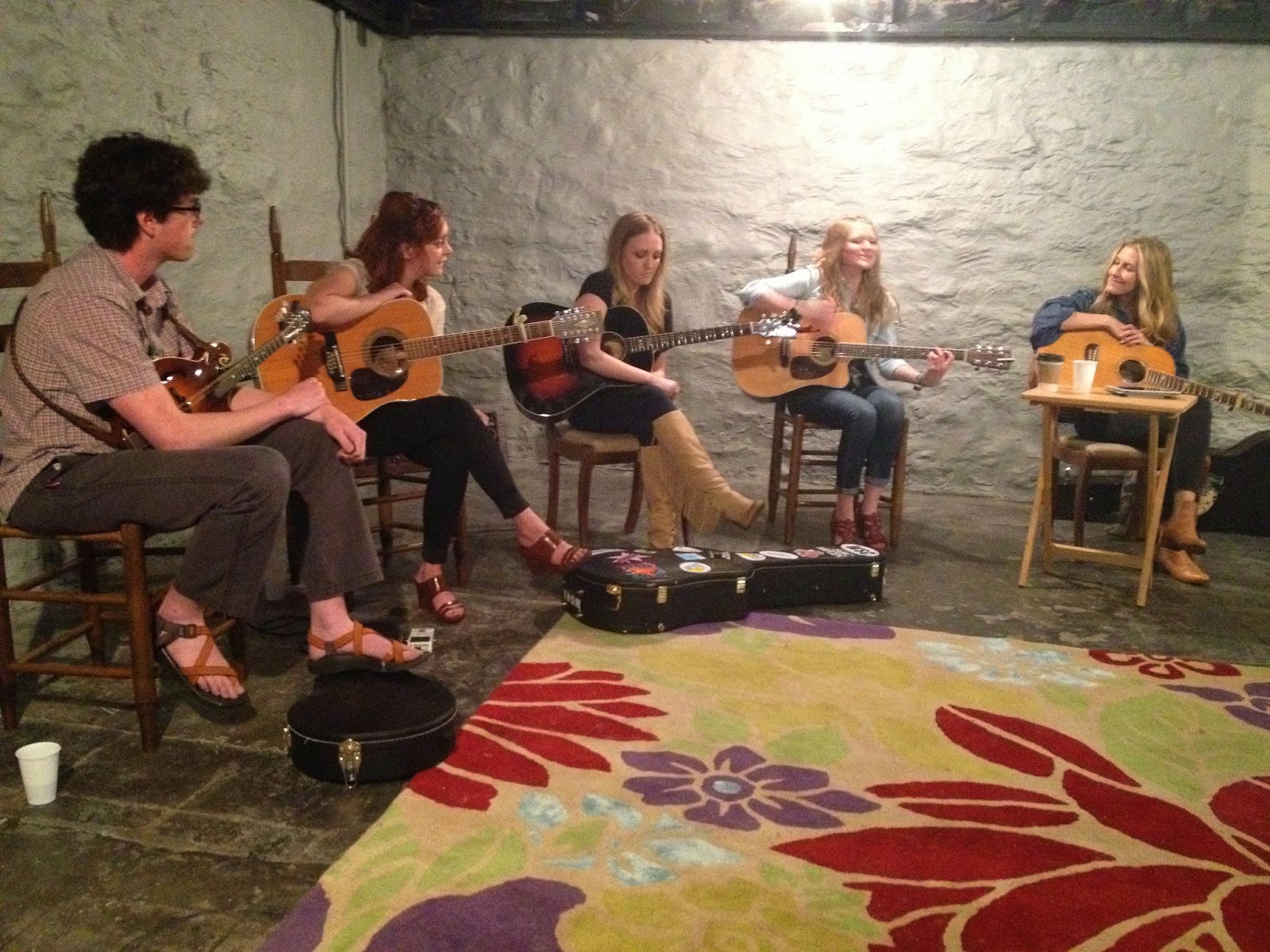 In the evening, we went to a place called Atmology. Ella Mae Bowen, Melissa Fuller, Hailey Steele and Lizzy McAvoy were singing in a writers round that evening. Ella Mae Bowen is my hero, and I was so excited to see her play. The show was set up like a living room and the atmosphere was very relaxed. Everybody's songs were so good, and so honest. I just sat there, amazed. It was the best writers round I had ever attended. 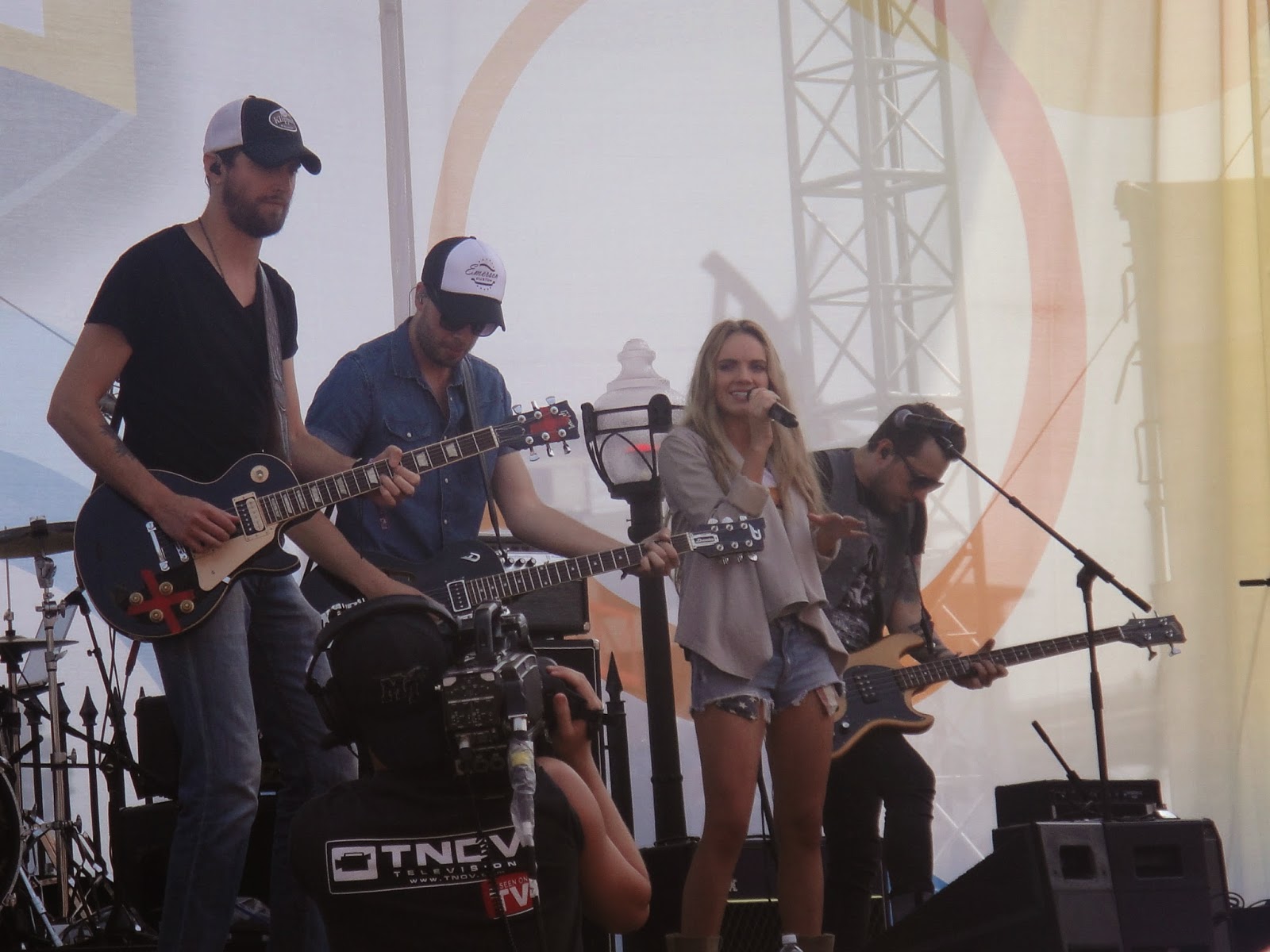 The next day after working at the hostel, I got to watch Danielle Bradbery perform. I got to riverfront just in time for her set. It's crazy to think how far she has come, because I used to watch her on The Voice on youtube and now she's one of the main performers at CMA Fest. I was walking downtown and saw this group of kids busking, so I gave them a dollar and took a picture. Mom and I made friends with a Japanese lady, Yukiko staying at the hostel, and I took her around broadway. It was really, really hot. 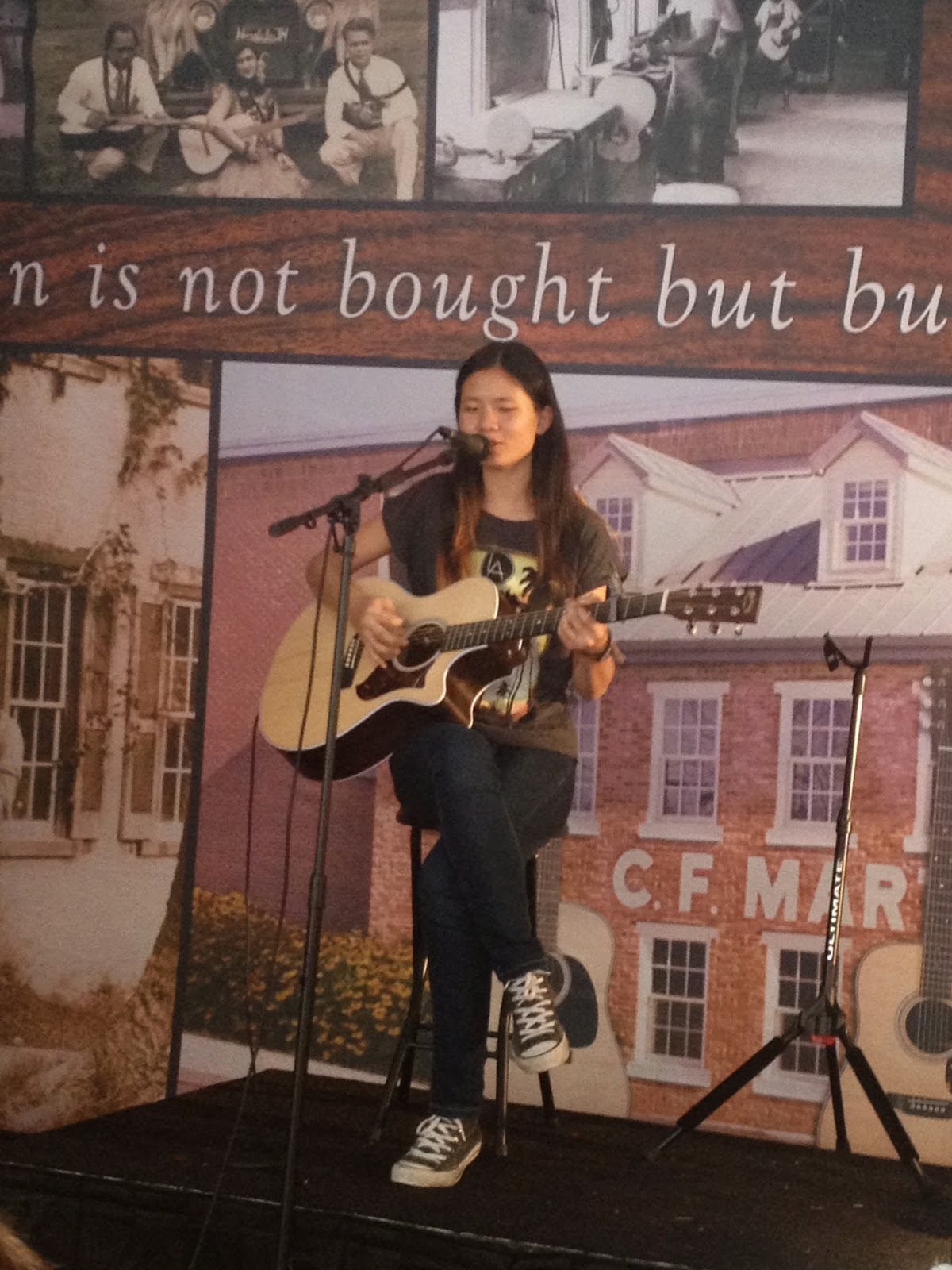 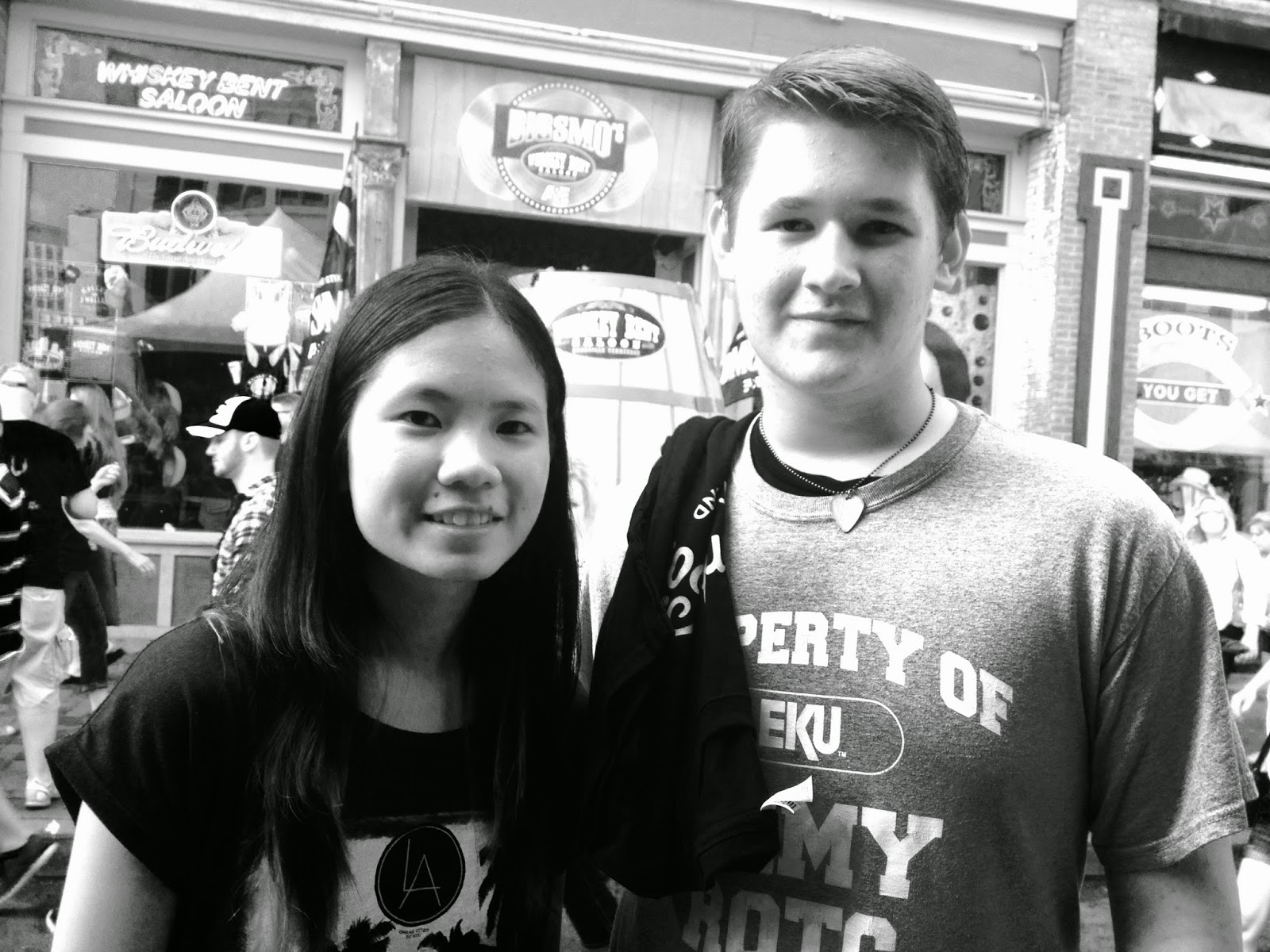 On friday, I played at the Martin Guitar booth again. I sang 'Dandelion Days'. After me, someone sang 'Wayfaring Stranger'. He later introduced himself as Steven. He plays the mandolin really well and his mom showed mea video of it. He even let me play his mandolin, but I didn't know any chords. 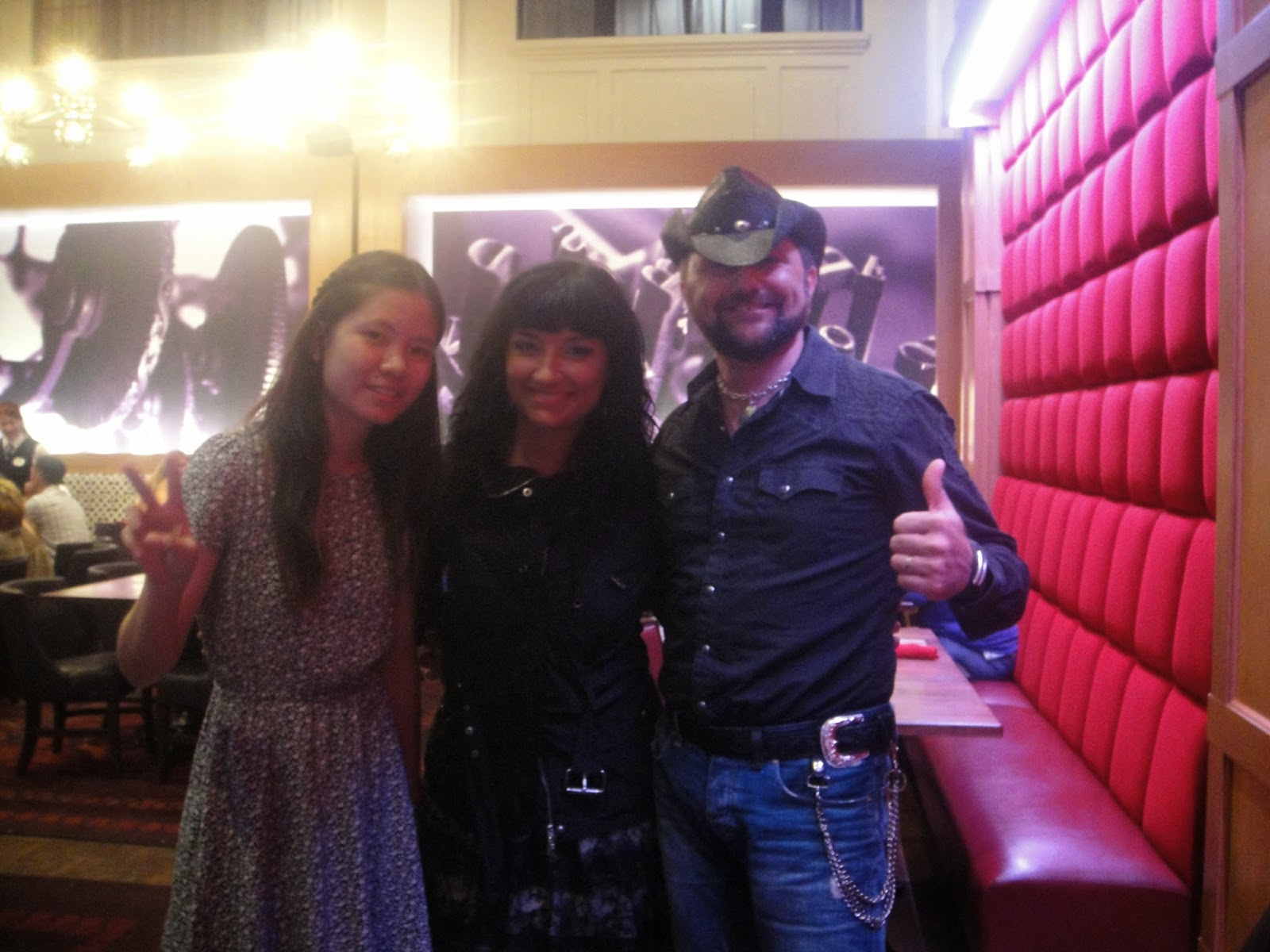 I also got to perform at Hotel Indigo that night. It was a full 30-minute set. I was so excited about that. I got there early but the organiser wasn't there yet. While waiting, I met Marta and her husband, Federock. They both make up the duo '12 Notes'. They were scheduled to perform as well. They flew here from Italy to do country music, isn't that awesome? 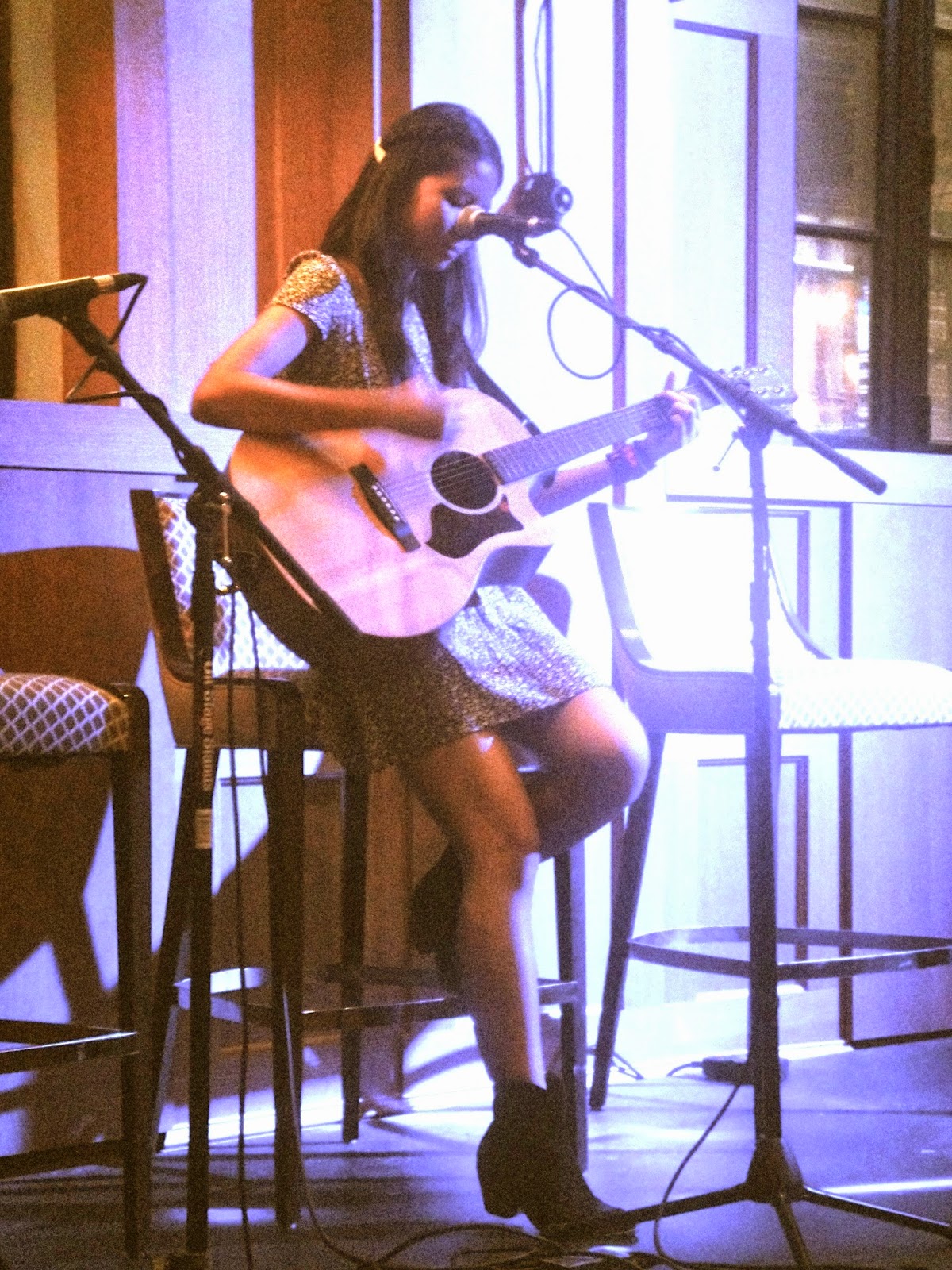 I was the first to perform. If was quite a rush, and was over before I knew it. Two years ago I didn't even have enough material to fill up 30 minutes. I was nervous at first, but then started enjoying myself more. 12 Notes came on a few sets after mine, and my mom, Yukiko and i stayed on to listen. They're the most happy and positive people, and it just makes you happy listening to them. We enjoyed their set a lot. 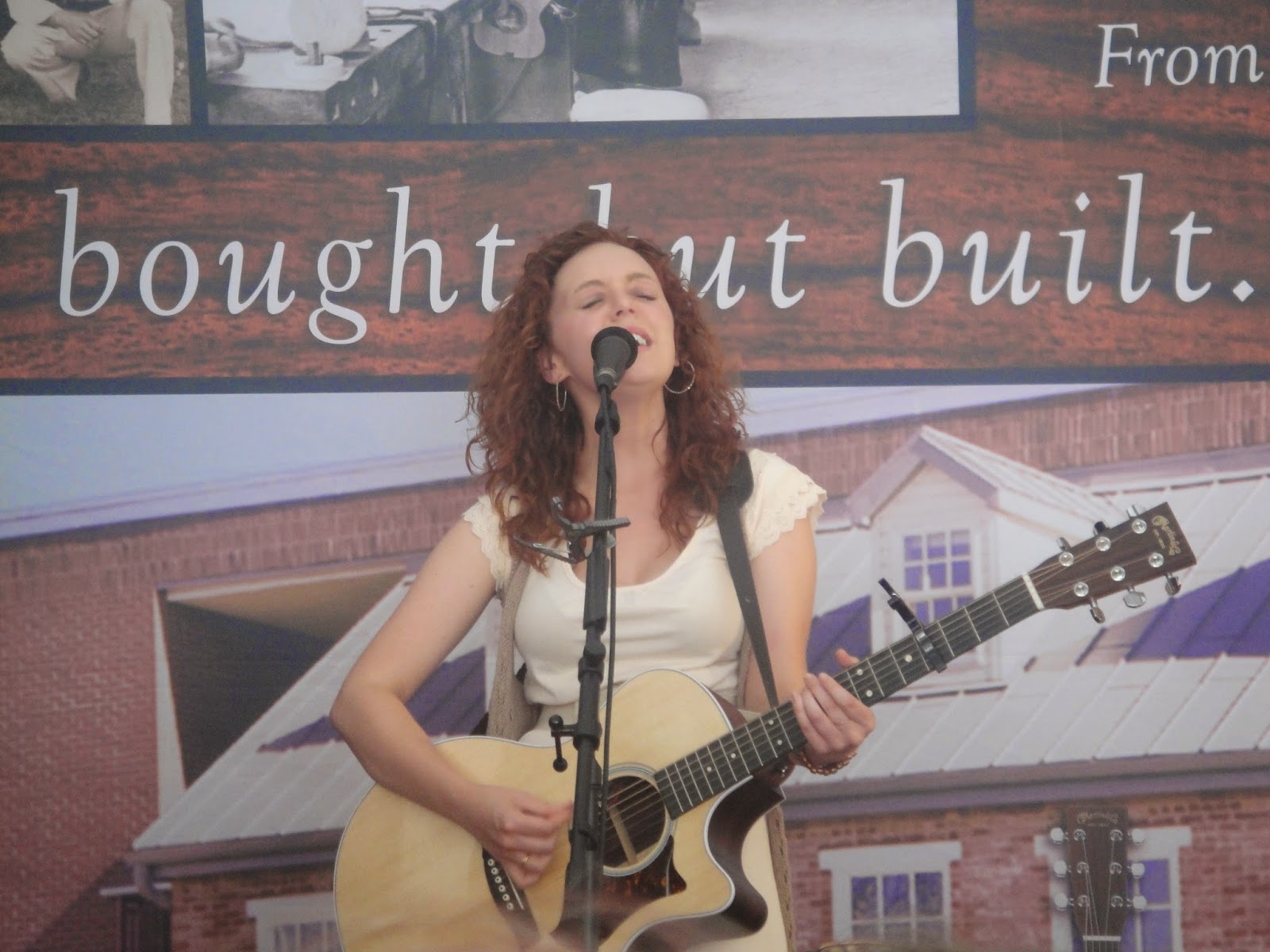 During the last two days of CMA Fest, I got to watch Ella Mae Bowen play again. I also got to see Kelliegh Bannen and David Nail perform. David Nail is awesome (am I using the word awesome too much? I might just need to widen my vocabulary). My favourites are 'Whatever She's Got', 'Red Light' and 'Let It Rain'. And he sang all of those songs and more. Everything doesn't quite feel real.
On monday, I worked at the hostel till later in the afternoon. I wanted to go to the Bluebird Cafe, but I was scheduled till 5.30 and would not be able to make it there in time. I ended up finishing by 3.30 and there was a chance I could go.
When I got back, there was still quite a lot to do so I decided not to go but Ron and Tracee, the hostel owners said I should go. They were going out anyway, and dropped my mom and I off. We were about 15 minutes late, and the queue was so long! I saw familiar faces; Marta and Federock, and Camille and Anthony. They saw me right away and we waved excitedly to each other. They were way ahead in the line though. While in line, I Jon and his band from Hawaii. They were on tour here and they were the nicest people. We sat there in back of the line and talked for a bit. Then, everyone who had a stamp (which included me because I got my stamp two years ago) were led into the cafe first. I had no idea I was going to perform, I thought I could just get in with my ticket. The amount of people going to the Bluebird seemed to have multiplied since I last came. I asked the girl behind me if we are actually going to play and she told me that if you have a stamp, you're guaranteed to play. That's when I started freaking out. All along I thought I'd have a 1 in 100 chance or something. Barbara, the organiser came up on stage and called out the list of performers. I was second. First was someone who had kept his ticket for 6 years. He looked very familiar, but I couldn't quite pin point where I had seen him before.. 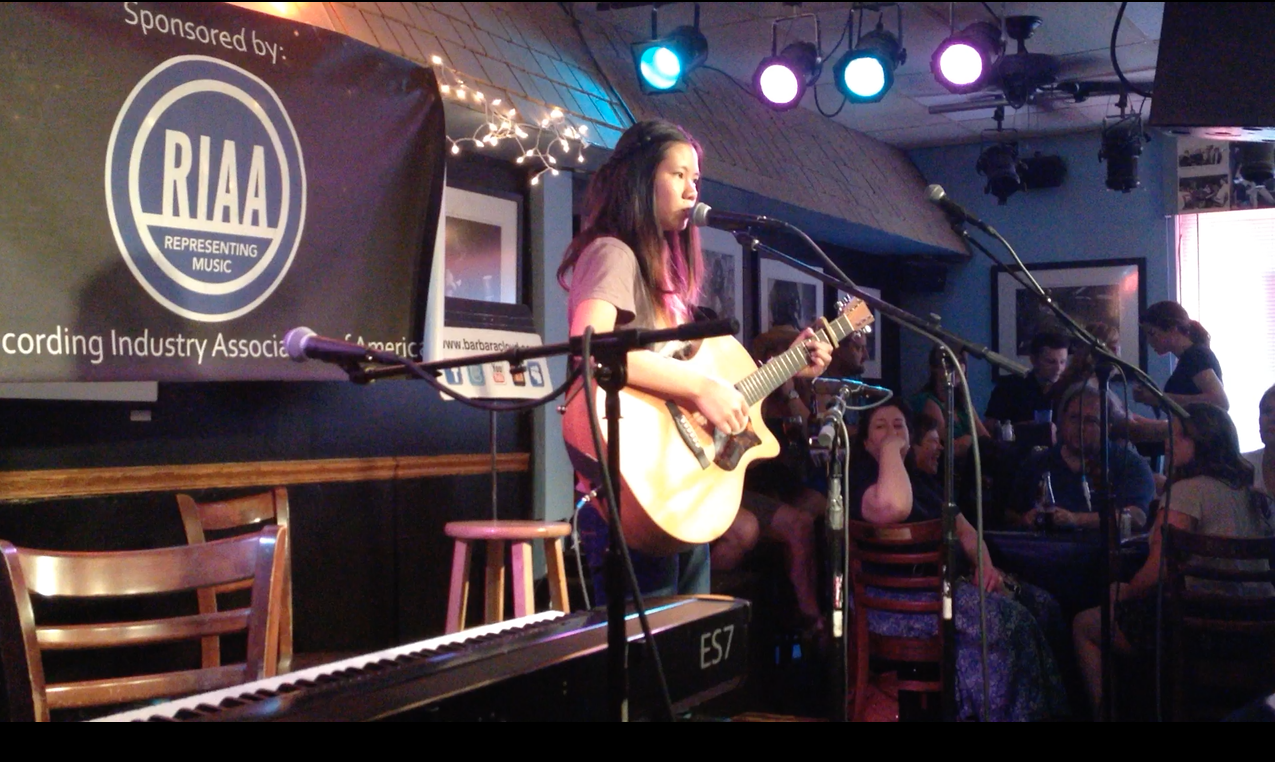 I was pretty much shaking when I went up. I sang 'Dreaming'. I sure felt like I was dreaming. It was absolutely surreal. The next few people were trembling too, I'm glad I wasn't the only one. Everyone I met on this trip got to perform that night and I think we were all so excited about that. This was the place where they filmed a lot of the show Nashville, and also the place where Taylor Swift and Garth Brooks and so many others started their careers. It was so amazing to even be in here.
I talked a a few people after the show, and they told me they liked my song! I was pleasantly surprised. I'm not very confident. I guess I've got to believe in myself a little more. I was at the post office and the lady at the counter saw that I was mailing CD's to places. She was like
"Oh, are you a singer?"
I said that I was hoping to be one. Then she said
"No, no don't say that. Say I am a singer!"
And I did. 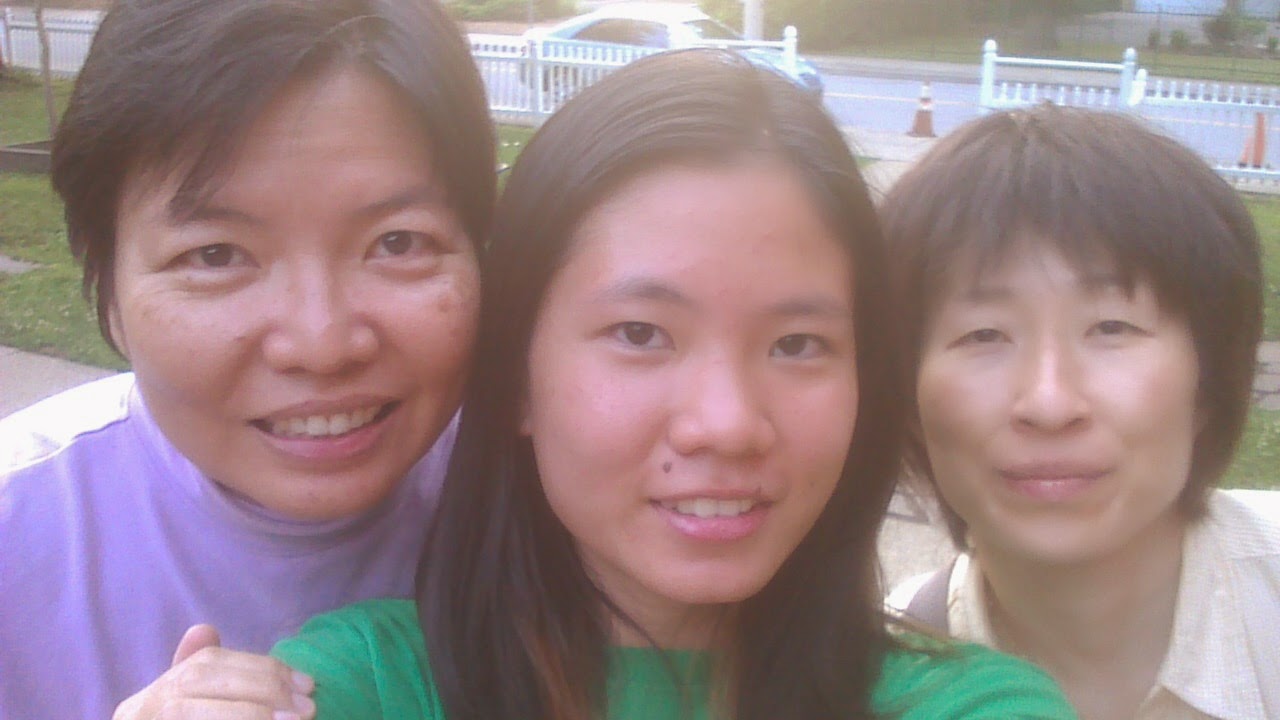 I love how we're meeting so many people with so many stories to tell. They have traveled the world and its is so fascinating to hear about. Someday I'd like to do that too, although I am kind of doing that already. I'm missing out on a lot of things back home like camp, events, Taylor Swift's concert but I am here and I'm having the time of my life here. I can't thank you enough for all your support, getting me all the way here and all. See you soon!
Posted by Amrita Soon at 9:42 PM

Email ThisBlogThis!Share to TwitterShare to FacebookShare to Pinterest
Labels: nashville