Where do I even begin?

What month it's been so far. I'm sitting here still not able to believe it actually happened. I'm so tired. But good tired. And I'm so happy.
I set very high, unattainable goals for myself. The 'impossible' kind of goals because I wanted to look back and know that I tried. "Shoot for the moon and land in the clouds" is what my dad always says. He claims he came up with it, but according to Goodreads, Norman Vincent Peale said it.
I also made a list of more 'realistic' goals (I think too much about things and make lists). Some of the things I wanted to do were: 1) release an album 2) play two shows in one day 3) perform at a festival
And I can't believe I got to do all of the above this month. Today I'm not really doing anything, so I decided to write all about it because I don't want to forget it. Also because I haven't updated this blog since it officially became my 'website'.
I've been rehearsing for a christmas show on ice, so on saturday I was out of the house before 8am. aI think the only thing that kept me awake was the coffee I had in the afternoon. Uh oh. After rehearsals, I went to Jaya One for Popmarket #2 at Jaya One. It was so much fun I performed twice. They set up the stage in the middle of a bazaar and put bean bags all round the stage for people to sit on. I played to grown ups as well as little children who weren't afraid to sit right in front of me and dance. Came home, changed, and then went out again to perform at a school prom. I was really nervous for that because I don't really get to play to a group of people my age (Last time I did that, I was 10 and it was for my school talent show which I messed up so bad). But they were really nice and it was the nicest prom I've been to. (I've actually only been to two proms including this one) 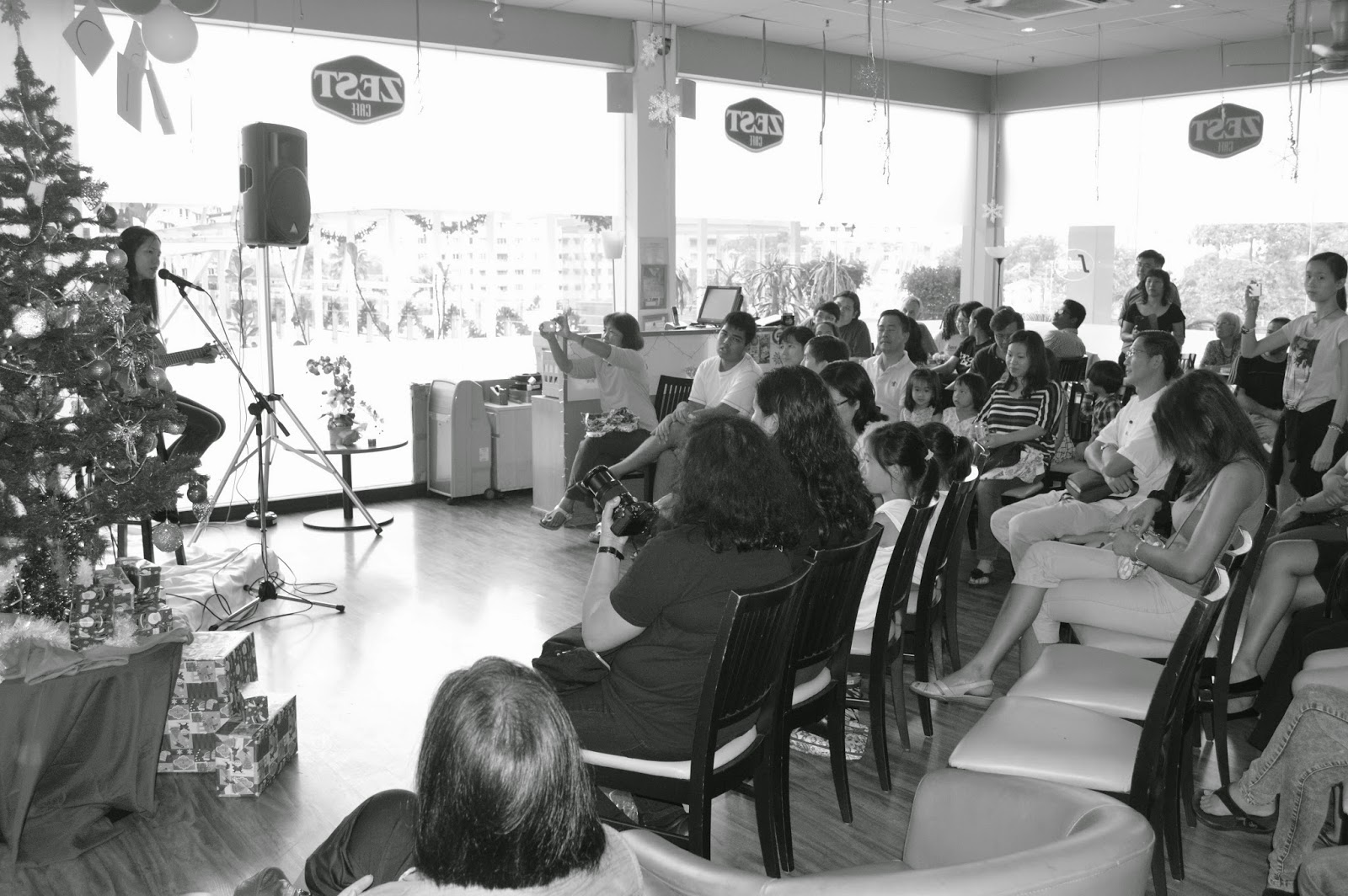 I also launched my album! I was freaking out more about what I was going to say than the actual performing itself. So happy its finally out! I had nightmares prior to the launch day. In one dream I dreamt that no one came and I played to an empty room. That actually happened before in real life which made that dream scarier. In another dream, I dreamt people came, bought the album and then hated me and my music after they heard it. MY HEART WAS POUNDING FROM ALL THE IRRATIONAL FEARS. But in the end quite a lot of people, and it turned out to be pretty great. I can't believe that my friends came. I don't know, some of my friends like the posts and social media stuff and that's about it. But the fact that they actually came made me so happy. 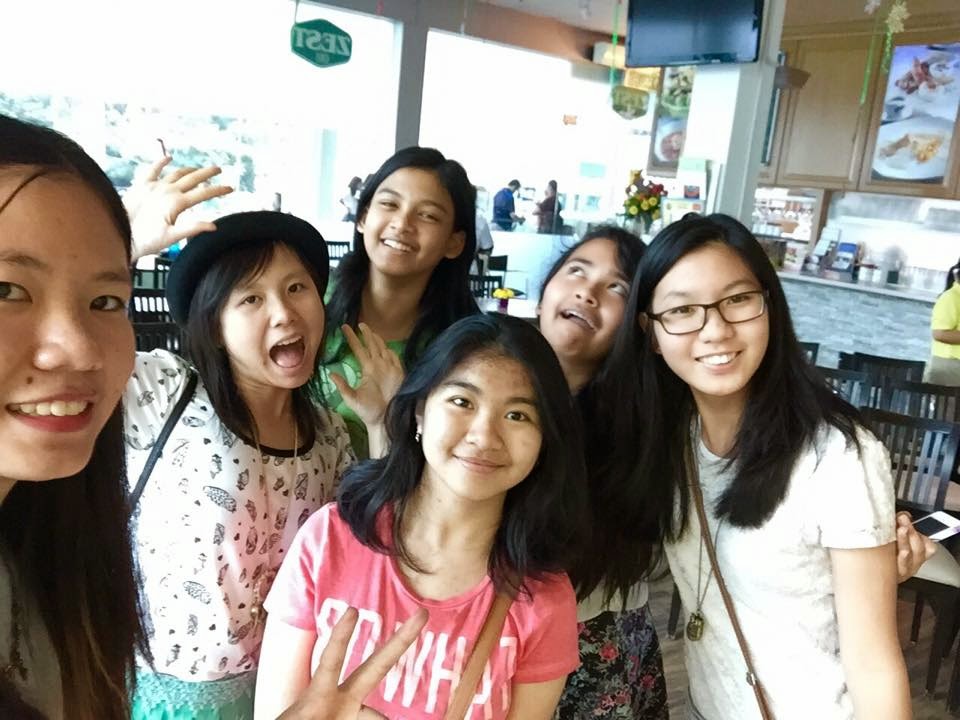 The next weekend consisted of more skating, rehearsals, a radio interview, soundcheck and then Ohhsome Fest!! After skating class, I went to Hitz Fm's studio to do a short interview with them about the festival. I was so nervous and so excited. Nervous and excited basically sums up the week. They asked me about my songwriting (which I have never been asked about before) and boys (also hadn't been asked before) and of course how I felt about the event. It was so cool. I only regret not speaking loud enough. I'm not very loud in general so I have to work on that. After the interview I rushed back to the rink for rehearsals. The interview aired while I was on the ice, so it was like I was in two different places at once.
It all went pretty well the next morning during rehearsals at the rink (yup back there again). I was supposed to leave early so that I could make it for soundcheck in time. I left my guitar at home and told my dad to take it for me because I was going to rehearsals with a friend and didn't want to leave my guitar in the car for so long. Then, my dad was late and I took a cab all by myself to the venue. I jokingly asked if the guitar was with him when he called. It wasn't. So I was late for soundcheck (I hate being late) and with a pair of ice skates but without a guitar. *PANIC* At least I could still check my vocals..
When I got there, I saw the stage and it was huge! There was an actual backstage and barricades and artificial grass and everything. You could see the twin towers from the stage. Wow. David Choi, WongFu Productions, Elizabeth Tan, Narmi, Dash and so, SO many more in the lineup. And then there's me. Standing there a little lost, a little scared, not knowing how in the world I was lucky enough to get to do this.
They handed me a set of rules and the schedule to read through and tags to get me backstage. There were two security guards to open the door for you to enter the backstage tents and two more on the inside. They were a little scary to be honest. I said hi to the people I know and to the people I didn't know and then met up with my dad. We went to the quiet corner of a cafe until it was time for me to report backstage. The rest of the family and my friend, Xin Hui came later with my guitar and we went up to the rooftop of Avenue K.
I saw some of the announcers from hitz fm and some of the other acts backstage. It was almost my turn to perform. Then, it started to rain. People were rushing into the shelter, some came back with ponchos. There were cameramen and gigantic speakers hanging from the stage. Someone carried an umbrella for me and another person plugged my guitar in for me. It was all very, very strange.
When I went up to the stage and saw people in ponchos, still standing out in the rain. I couldn't believe they stayed! Maybe they were reserving a good spot for later, maybe they actually wanted to listen. I don't know. But they were there and I'm happy that they were. They cheered and clapped after each song and I could see my grandfather taking pictures with his phone. It was such a cool experience. I came down and enjoyed the rest of the concert with my friends. I even took some pictures with people (how surreal and strange). 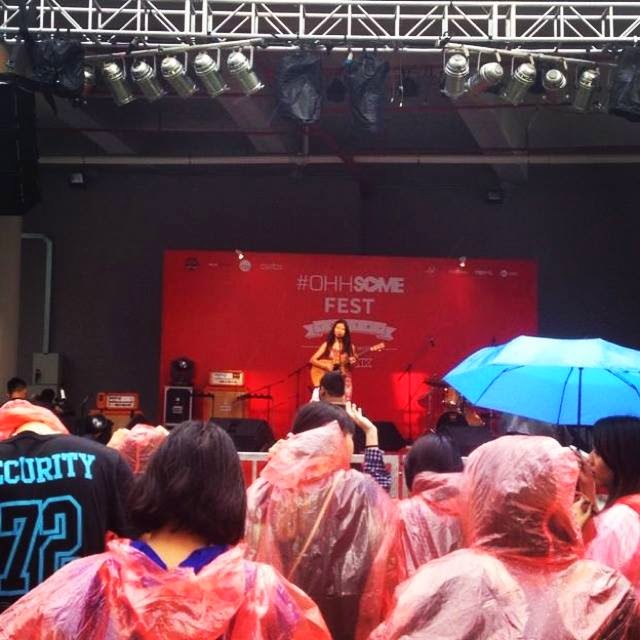 I didn't realise until after I performed that there was a gigantic screen projecting the performances on stage. OMG. 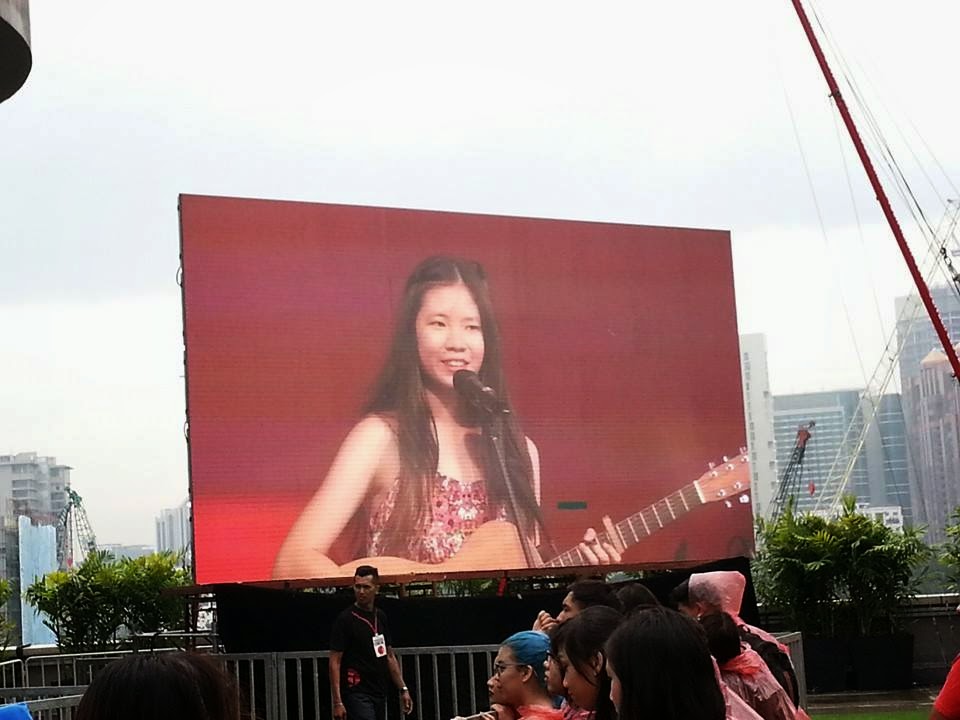 This hobby I'm hoping to make into my career is unpredictable and scary and I hope I'm approaching it in the right direction. I can't exactly tell where I'll be or what I'll be doing in a year or so, but there's so much to learn about business, marketing, design, videos, and everything not related to the music. Sometimes its really overwhelming. I listen to interviews of songwriters about how they handle all this stuff and yet continue to write songs. Because there's not really a class or course to tell you what to do, those interviews sort of act like the lectures I guess. Anyway, I found this and thought it was helpful:

"As a songwriter its important not to put too many filters on what you put out emotionally. Because if you factor in what every single person in the world is going to think of the song, is anyone going to be offended by the song, and what everyone is going to think about me, and how am I going to play this 10 years from now, oh my god, you'll just sit there with a piece of paper and just doodle clouds and hearts and not write anything."
"You're working both right and left sides of your brain at different times and you have to know which time to turn one side off and the other side on. It's actually really, really fun. Um, and sometimes you're not in the mood to have a conference call. And you're sitting there going "why can't I just make everyone else do this, and I just write the songs?" and then you realise I have to make to make these decisions and take ownership of everything that happens in my career, or else I will get bitter. And I will be like "why did you make me do this?" and it's like "well, you weren't in the conference call, so you couldn't say that that was against your vision for this album." So you've got to show up I guess. " -- Taylor Swift

So yeah. This pretty much sums December so far. Only 4 skating shows and one or two more performances for the year. After all this excitement, I'm going to be getting back to my normal life again. I'm going to miss being this busy... Maybe I'll finally learn how to drive. Or maybe, I'd get to be this busy next year too. I sure hope so. I took a little break from writing songs just to let this all sink in. I've been trying to stop and focus on 'Clues' and promoting it, but I also have been writing a lot hopefully for the next album and at this point, I'm happy with how it's going.
This year has been amazing. I've learnt so much, seen so many places and met so many wonderful people. I can't believe I'm chasing my dreams. And I can't believe people have been so supportive. I can't believe you have been so supportive. I'm so, so grateful.
Posted by Amrita Soon at 5:30 PM