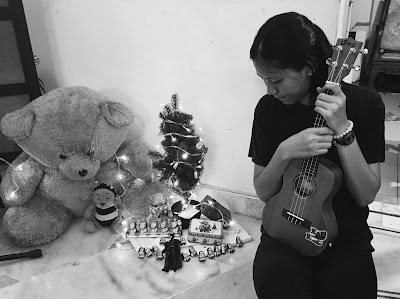 I'm writing this at 2:19 in the morning. I had wanted to write something at the beginning of this new year, but I didn't end up having much to say. I think it could have been the opposite too- I had a lot of things I wanted to say, I just didn't know where to start.

The fact that its 2017 and a new year seems like a good place to start. Optimism levels are reset, changes to this blog have been made, and I've got a plan to upload videos more regularly and learn new chords;
I'm looking up.

I found a second family in the people I spent my time with the most. We are so different but we support one another and they really have been such an amazing group of people to be around with. These pictures were taken after they surprised me at a show I was performing at. I didn't think many people were going to come because I invited people to come but no one really said they would be coming. It ended up being a room full of many familiar faces that I really didn't expect to see. It was a lovely night.

Last year I performed at places where I could hear the conversations around me, and at places where I could feel the audience taking in every word I had to say. I finally learned how to drive. I gave a talk. I also am finally proud of the music I made, two years after I made it. I cut my hair. I flew to another continent by myself. My brother and sister grew up even more than I thought they would've in a year, and did some really amazing things.

Even though age is just a number, 20 taught me a lot. When it comes to these 'reflection' posts where I think about what I learned the past year and things I've experienced, I always say that "I'm happier now. I'm learning to be myself." But I think this year I really did.
When I was little my teachers and parents often commented on my maturity. I grew up before I had a chance to be a kid, I took pride in pretending to be grown up. I thought being mature meant acting like a grown up, not showing my emotions, not needing anyone's help. Music and time taught me to be more childlike in the way I saw the world. I learned to listen to my heart more- something I had always struggled with.

But in the recent months or so I had fallen in line with the quiet rules of society. Slowly, but persistently the words and judgement of others began breaking into my world. Because it all happened so gradually, I didn't realise it until recently. I stopped writing on my blog, I stopped writing songs. Even casual posts on social media had to be thought about thoroughly. When I've been let down, I stopped trusting people. When I made a mistake, I stopped trying. I stopped trusting myself. I kept myself busy with three part-time jobs (including music, which I hope to make full time) so that I didn't have to feel anything. It felt as if the time raced by me while I just stood still, let everyone and everything around me pass through and move on, and I didn't say a word.

But allowing yourself to feel is crucial. It gives you more words to express yourself. You'll understand yourself better and learn to get through the difficult things. You have to allow yourself to feel happy without worrying about the happiness slipping away, because its bound to slip away. Sadness is there so that you can feel happy again.
Posted by Amrita Soon at 3:00 AM