Hello again from the draft box.

Its always an eternity between my posts. I write and then never post them, or I just didn't write but I figured that since I'm probably only writing these for myself to read and just to keep track of things it's probably okay (?)

When the stay-at-home order was lifted and we could go out again, it almost felt like we jumped right back into the way things were before all this too quickly. A lot of things have changed though. I didn't think I'd be changing where I worked (again), but here I am a month into working at a new place, and still not sure if I love doing this. But I don't hate it though. Masks and gloves on, keeping a distance from everyone as much as possible, I'm just happy to be working again but you always miss something once its gone and I now miss making music everyday.

This in-between going back to normal and having to stay home every other day was a rather strange time. It seemed like all the quarantine motivation I had for everything had run out. It was hard to adjust to this because there seems to be no end to this. Before, it was like you knew it was only going to be a month. Do what you can in this month to improve yourself, come back stronger. Then it was two months. Okay, let's keep going. Then it became indefinite and it almost felt like "ugh, what's the point?" So I eventually stopped doing everything and did nothing.

I wrote a song with Chris during MCO, and we sent each other files through instagram. He asked if I'd be willing to write on a track of his, and I said yes. It was fun exploring something different, especially when you've got writer's block and a lot of time on your hands. I've had this idea kept in the back of my mind for a while; about being away from someone and looking at the sky knowing that they are looking at the same sky makes the distance not seem so great. That's how I write most of the time. I think my brain had to adapt to not being able to write whenever I want to, and I sort of pin an idea in my head to save for later. My theory is if it's good enough I'll probably remember it. So this idea had been pinned for a while and when I hear Chris' song he sent, the pieces kind of fit together. Then he'd edit the song and send it back to me. I'd re-write some of the lines here and there and send it back to him. He'd let me know what he thought of it and we'd exchange files back and forth, making little tweaks here and there until it was done. I didn't think much of it. I thought it was a fun collaboration and something to occupy our time and so I was pretty surprised when he called me to come to the studio to record and that we were going to release it.

Flash forward to now, and we're being played on the radio!

Most of the time, its actually like nothing has changed. I'm still just doing our my own thing and working on music and stuff. Every once in a while it hits me that this was something I dreamed about when I was younger and for a short while I'm just like: "Woah, this is real". I get to hear our songs played on the radio. I don't know how long they're going to be playing it, but in this moment I'm trying not to think too much about it, and I'm very grateful for this moment. 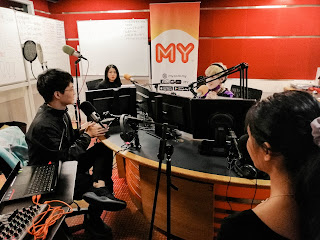