Woke up to the sun shining so brightly through my room window and my neighbors kids screaming like monkeys. Ahhh.... nothing like new year. I had a nice, but late breakfast and then out to the garden to clean up what the 6 puppies left for me during the time I was asleep. Since it is the new year and all, I cleaned my fairly dusty room. The rest of the afternoon was spent baking. We made pineapple tarts. Grandma-mama taught me how the other day and we thought we'd try it out again. This time with grandma's modified recipe. It tastes so good! But it takes so long to make!!! It's fun to make a couple of batches but I can't imagine how hard it is to do this as a business....

The clock struck twelve.
The fireworks so loud,
Welcoming the new year.
Then came the crowd,
Roaring with cheer.
There was no countdown
Because we didn't know the time.
It was a let down,
The fireworks and the clowns.
2012 has come!
Hurray!
Now, let's go home. 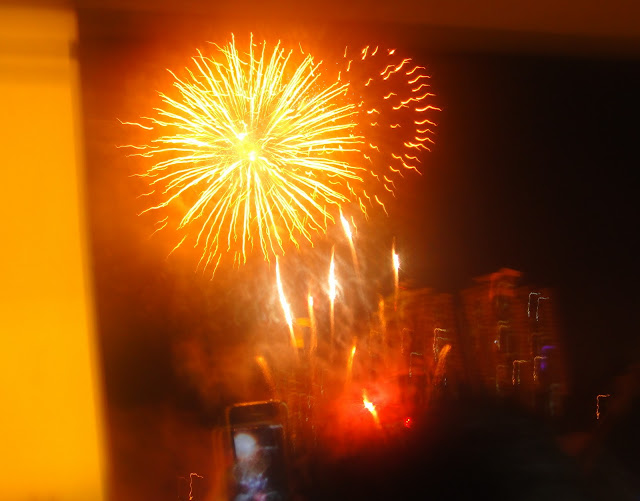 We went to Sunway for new year's eve again this year. Right where we were 365 days ago. And like any mall at this time it was filled with people!
Met up with my grandparents and aunt and we ate at Bubba Gump. It was quite pleasant and there were so many things on the walls to look at like number plates, sign boards, including a TV playing Forrest Gump non stop and just the general look of it was pretty cool. They also had food for vegetarians which was a bonus. Then we went to walk around the mall. With still about two hours to the countdown, it left us with lots of time to shop. So we thought. But the shops were all closing. My sister and brother really don't like shopping unless it's shopping for something they like like toys or dance stuff and I had to bring them to my parents who were sitting at café. We walked around passing the closed shops and ended up looking down at the ice-skating ring. I wanted so badly to skate, but I didn't want to go alone. At that time all of us were just literally waiting for the new year to come. We weren't doing anything much. There was nothing much to do anyway. The café we sat at closed and switched off their internet. We made our way to the hotel hoping there was a quiet spot where we could wait but the hotel had some sort of dance/disco party going on and it was so loud. Passes by the ice-skating ring again. I asked my aunt if she wanted to go, and she said yes! We rushed down hoping it was still open and it was! That's great! It was my auntie's first time and there weren't that many people (obviously, who would be crazy enough to go ice skating at 11?) so I could go round really fast. So. Much. Fun. Loosing track of time, we had to rush out to see the firework display. There were already so many people out there. Worst of all, they have those snow-in-a-can things (where you're actually spraying out some kind of soap.) and were spraying it everywhere. It was so smelly! I read the instructions on the can once and it said not to be sprayed directly at people, which everyone was doing.... We got it too, even when we were just standing there. About four more minutes to countdown (actually we were already counting down the minutes and hours already...) Just waiting.... Then suddenly the fireworks started. No 10...9.....8....7...., just straight to fireworks and we couldn't see it. The building was blocking. Everyone there couldn't quite see it either. We rushed to the basement to see it and there it was pretty visible. I went to call my grandmother and everyone but my the time they got down it was already over. That was fast. It's normally longer than that and the fireworks are normally higher too. I guess maybe there was a lack of budget or something. Okay, that's over. Now let's go home. When we got to the main entrance, we saw it. Madness, pure chaos and FOAM. It was being sprayed everywhere by everyone in that giant big crowd. How were we to ever get to the other side? There was no other way. It's now or never. They were already bringing more of those snow-in-a-can stuff by the boxes and selling more and more for rm10. It was like a war zone but after lots of coughing, ducking, and avoiding them (at least, trying but failing miserably) we made it to the other side. We said our goodbyes and went into the car and left. My parents raving about the fact that we managed to beat the crazy traffic jam that we would've been stuck in if we were a few minutes late. Then, almost reaching home I got a phone call from my cousin. I didn't mention her yet right? Well, she was there too but with a bunch of friends. One of her friends left his car keys in her bag which my dad had put into our car. So we had to turn back into the traffic jam. I knew things wouldn't just work out as planned. Passed the keys and took a long trip back because my dad wanted to avoid the jam, we took a different route.
I had fun. Ice-skating and hanging out, not really doing much.
Nice way to end the year.
Although...
it still feels like 2011...........
Posted by Amrita Soon at 11:53 PM No comments: