I've always had a liking for the color red.
When I was 11, my English teacher in school asked us to write a poem about a color. I picked red, but I wasn't happy with what I wrote. So I put a little mental note at the back of my head to write a better poem of the color red someday.
So I one day, almost a year ago, I decided to write about red. Except I write more songs instead of poems now. I had also become madly in love, and obsessed with sunsets. Red always fascinated me. How could it stand out and be bold, but also be subtle and soft? It could represent happiness and it could also represent sadness, and anger. It could be pain, it could be fear, but it could also be brave. It fascinates me how the sky is red, just before it gets completely dark.
So I wrote the song Red about the sunset and that feeling when you had such a wonderful dream that you didn't want to wake up to reality. Only it is reality, and the truth is a lie but you want to keep living in the lie because the truth hurts so much more. Have you ever felt that way?
Also, I was too into the story written in Vouge.
Oh, and you can download this song for free here.


Taylor Swift also revealed that her next album is going to be called Red. Cool!

Is it more than a coincidence? My mom seems to think it's more than that. I think maybe its more than that, maybe its not. So I don't know what I think of it.
Also, since we're on the topic of Red, I just got the email form REDFM telling me I can join the program! That means: yessssss!!!
and also my parents have to write a letter of consent.
:)

Posted by Amrita Soon at 6:42 PM No comments:

Email ThisBlogThis!Share to TwitterShare to FacebookShare to Pinterest
Labels: Red

I whisper goodbye, swear its not for the last time.

Hi :)
It's been a while, hasn't it? I have quite a lot to tell you but I don't quite know where to start, as usual. I've been happy busying myself with school, music and art and it's been a lot of fun. There have been some ups and downs but I've been generally very happy. A lot of things seem to be happening and un-happening at the same time. I've been writing a few songs here and there, leaving them halfway and starting another.. Its been exactly a month since I started school, and it's been good. Math is definitely not my forte, and neither is talking to people, but I'm trying my best to keep up, talk, and figure out how to use my calculator. But it has way too many buttons. My English teacher taught us about nouns, verbs, adjectives and so on but they never stick in my head, no matter how much I write. I'm getting used to the 'no pencils when writing and essay' rolling correction tape all over my notebook. I can't help but wonder if my blog post is grammatically correct now. Anyway, here's what I did this month: 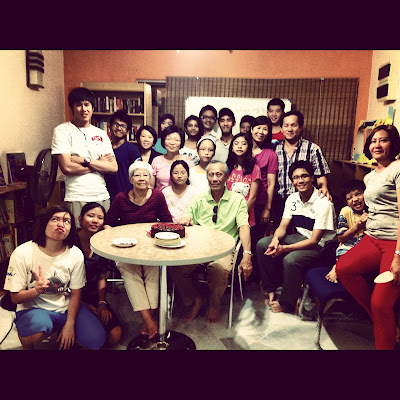 We celebrated my grandfather's birthday with a surprise party. We had a movie night/party/reunion. I think we managed to make him believe we genuinely forgot his birthday until that night. I tried to bake a cake, but I realized we were out of baking powder. I baked the cake anyway, thinking it's only one teaspoon. I could do without it. But it turned into a gigantic cookie. A big, bubbling, flat, slightly burnt cookie. The power of just one teaspoon of baking powder is remarkable and important and should not be overlooked. Again. We bought a cake from the bakery instead. 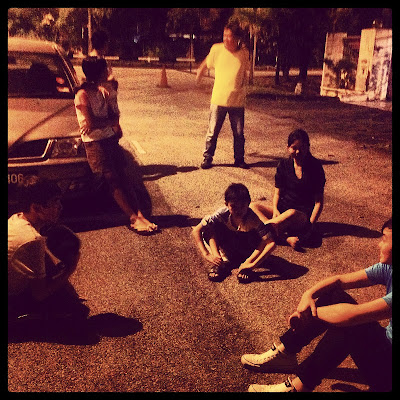 The surprise party was also movie night at CLIC. I got to meet up with my friends I did not meet for ages. We rode on scooters and sat on the road, ate popcorn and caught up with what was going on in our lives. It's interesting how close we all live but still seem so far away sometimes. We visited a mall called Publika one Sunday for a design exhibition. It was such a fancy place. Fancy. They sold soap shaped like cupcakes and had photo shoots at the corridors, ancient antique typewriters that click loudly with every touch of an alphabet, bicycles that could've to have came out of an old movie, the coolest boxes that looked like treasure chests, drawings of elephants that are beyond cute and wind-up robots that look like the ones in Hugo... My sister and I found the coolest jukebox machine at the back of a store and the best thing: it actually works! We were both beyond excited walking around the art market. 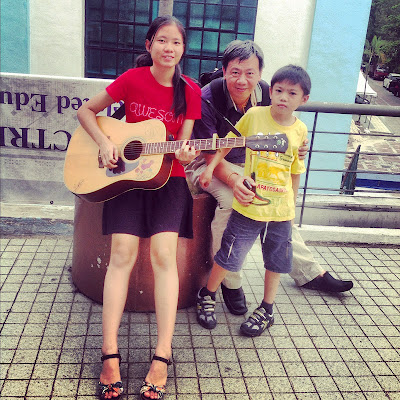 I also got to perform at Doppel Kafe's buka puasa event. I asked Jasmine, (whom helped me book the place for my Ticket To Nashville recital) if I could perform there, and she gave me a slot! There were a bunch of other acts too like Windy Days (whom I met at the 10th anniversary event) and Astrawnomi. This time, I didn't just get two songs, I got 5! I was excited and happy, but no one came. It has happened many times when I perform. Somehow I end up at the wrong place at the wring time quite often like once I went for a busking event and was supposed to be on stage but plans changed and I ended up standing by the speaker that was blasting so loud I couldn't hear myself think. I sort of hope for the best now but expect things like that to happen at any time. We hung around outside and sang songs until people started to come. I sang some songs with my sister and we just goofed around while waiting. 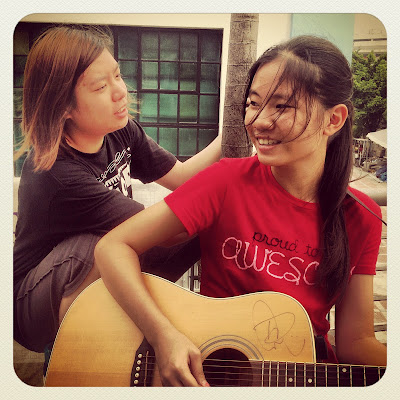 There were more people than I thought, and more performers started to come too. I was the first performer and I had a lot of fun. I'm also very glad that people enjoyed my set or at least I think they did. I got so used to playing to the wall in my room, the web cam on my laptop and events I've organized where barely anyone turns up. I love the atmosphere at Doppel Kafe. The people are very nice and supportive, feels like the open mics in Nashville. Thank you so much for having me Jasmine! 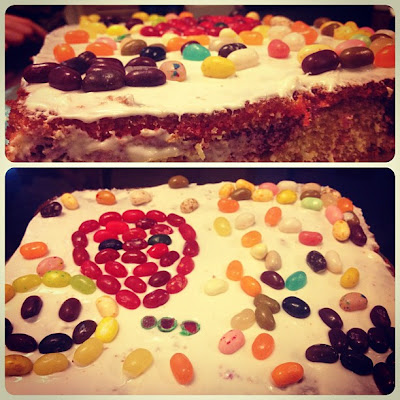 On Thursday, we celebrated my brother Arian's birthday. He was so excited to turn 8, so I baked him a cake topped with jellybeans. He had been counting down to his birthday for months now. It funny how we look forward so much to turning a year older when we are little but dreading it as we grow up. If you look closely at the cake, you should be able to see Spider-Man. Or at least his face. I put frosting all over the top of the cake which acted like glue for the jellybeans and swirled the batter with purple colours. I've learnt never to put magic candles on a child's birthday cake because when one child can't blow of the candle, another will help. Then another, and another and before you know it, the cake is completely contaminated by their saliva. So we just had normal, cheep candles that didn't even need to be blown. The wick was so short that after we sand the song, the candles were almost burnt out completely.
Yesterday, I auditioned to sing at Starbucks. The audition was at Taylor's Lakeside. That place is huge! My sister and I walked around feeling completely out of place. And lost. The audition was scary because the judges were about 10 inches and all four of them were staring at me. I don't know if I made it to sing at Starbucks yet, but in a few days I should know.
My facebook page has reached 370 likes and not one, but TWO of my youtube videos have reached 2,000 views!! They're just numbers but I can't help but to feel like finally all the hours of playing the guitar until my fingers were numb, all the tears, practicing and hard work is finally starting to pay off. I don't know how this happened. Looking back, it seemed to have happened really quickly but it actually took years. I received an email the other day telling me I was selected to be interviewed by RedFM and perform at a showcase! I had to read that email about five times before it sank in that it was real. And with all good news, there are always bad ones. They confirmed with me the dates and then... realized I am 16. So they told me I couldn't take part in this program and that they hope I'd understand. I felt like it hit me like a rock falling from a a high place. I sat there wondering what I could possibly say to something like that. So I told the person who emailed me that I didn't understand, maybe I didn't want to and asked her if I had to wait until I turn 18 to get anywhere with my career. Or something along those lines. I also asked her if we could work around the rules. She said that they would try, but couldn't promise anything.
I'm still waiting.

Posted by Amrita Soon at 7:52 PM No comments: