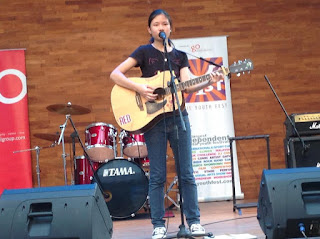 I remember walking past the stage in Publika a few months ago thinking "wouldn't it be the coolest thing if I'd someday get to perform here?" Yesterday, I got to sing there. It was for the FEYST Festival Finale, and I was lucky enough to perform for the opening and the closing. It was SO cool. The weather was great, it wasn't too hot and it didn't rain. I met many familiar faces from the previous few events and a couple of very nice people I haven't met before. Jasmine also introduced me to Liyana Fizi, a really awesome singer/songwriter. I was a little starstruck.
For this performance, I decided to sing a new song. So new in fact, that I had only wrote it a day before the event. It's called 'Clues' and its about finding the positivity in things, or something along those lines. The response from the audience was pretty good and I was surprised, and really grateful they listened. I have yet to record it for you guys to hear, but I promise I'll get to that tomorrow. Right now I'm dozing off as I'm typing and pressing the equals button instead of delete.
Goodnight!
Posted by Amrita Soon at 12:09 AM No comments:

point out my flaws I already know.


I've discovered the magical land of youtube. I'm sure of it. Where the music is heavenly and every suggested video is surreal. I'm now listening to amazing music by Lucy Rose.
It's a beautiful day so far and I want to thank you for everything you've done for me whether its reading my blog or listening to my songs. I've gotten a couple of really nice comments lately and its been wonderful. Thank you! I've also been writing quite a lot and my head's filled with all these words and lyrics that I need to process and write down, but I'm sitting at my little white desk and there are wires sprawled all over the table. Messy, tangled wires. I resisted the urge to pick them up (but failed miserably) and organize them all but here I am... rolling them into neat coils and stacking them up.
I'll write more soon.
Posted by Amrita Soon at 2:15 PM No comments:

We spend a long time preparing for what we think will be the future. Planning every aspect of tomorrow hoping it goes accordingly. They tell us to do the right thing because it would affect our future. Who's to know if what they think is right is the same as what you think is right? But we've got loads of time. After all, the future is a long way from now. We'll never get to tomorrow because once we get there it would've been today. So the question is, why are you waiting for tomorrow when tomorrow is today?
Posted by Amrita Soon at 1:49 PM No comments: