Nine: Goodbyes and Open Mic nights at The Venue.

I could say I feel just as lost as I did when I first walked through the stairs and up to my classroom, but am I? My last days of school went by excruciatingly slow. I couldn't count the number of times I looked at the clock waiting for the end of class.
I should be embarrassed that I didn't finish high school right? But I'm homeschooled, so am I technically not dropping out? "Amrita is going to follow her dreams" said my class teacher at the beginning of the last day. I looked down at my book wondering if I were invisible yet. But there was nowhere to hide. To my classmates; I'm not moving to another country or anything, I'm still here... but just not in school.
It wasn't a horrible experience, I enjoyed most of it really. And I loved English class because we did a lot of creative writing. When I signed up, I thought I might want to take the exams sometime but as the months went by, I felt like this whole thing was more and more pointless to me. I dropped more subjects by the next term, including the all-important-"you-need-it-in-every-aspect-of-your-life" subject: Math. I really couldn't do it anymore and every time I sat down to do my homework I felt like crying. Every week a new topic would be introduced and I'd feel as if I was being pulled backwards, the ropes tugging tighter and tighter until I could fight back no more. I wondered where my love for math had gone, because it had always fascinated me. It had always been intriguing to me. All that curiosity was lost as each lesson passed and I no longer wondered why an equation could be done in a certain way and began wondering why I was doing this instead.
I wasn't seeing my friends as much either because I was hardly in class, so that led me to not getting informed when there were changes in the timetable. I came when there was no class and didn't come when I should've. I did my English homework during class with my book on my lap under the table (and still got an A, by the way.) and handed them up in time, but completely failed my final physics test. I enjoyed biology too, but my teacher tended to talk out of the topic, so I read the chapters on my own while she taught.
I guess I wasn't as close to my classmates because I took less classes or maybe I wasn't very good at making friends, and I felt a little left out because I knew where they all hung out during the weekends, and I sat there as they planned what they were going to do during the holidays together. I decided to get over it and join in the conversation, so I told them where were good places to go and what time the shops open. I hope they have a great time, I honestly do.
I didn't want my leaving to be a big deal so I tried not to tell people about it, but I did prepare little cards and bracelets to give to my friends. I didn't talk very much because I didn't really feel I had the chance to open up completely, you know? You've got to act normal until you feel people would accept the crazy you. But I did make some really good friends who made my whole experience in "school" pretty awesome. I'm not going to name them all but Alex, who was in another class gave me a little handmade PopTart keychain for my birthday and Chloe, who was also in another class (I wish we could all be in the same class sometimes though) gave me this wonderful charm bracelet on the last day of school. 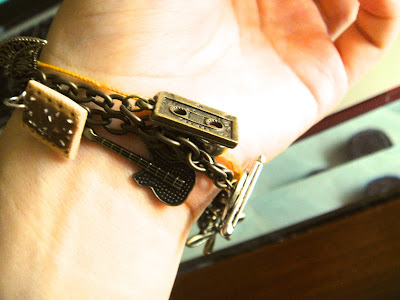 Now with the freedom of not having to go to class, I have been cleaning the house. I'm making full use of the freedom by staying at home. It's a glamorous life, not going to a real school. I put all my textbooks away and put all my worksheets for recycling (moving on to a new chapter in life involves cleaning up the mess I made in the previous one). I also reorganised the living room a little and started teaching (guess what) math to a little homeschooled kid. Me, teaching math? This is absurd. I'm not really doing much though because he is an autodidact. Yesterday was our first "lesson" and we did word problems on adding and subtracting negative and positive numbers online. Doing math with him is making me begin to enjoy it again; the spark in his eyes and his focus is highly admirable. His dad actually had to stop him because they had to go home.

On Monday, I went for Az Samad's Open Mic at The Venue #8. Az is an amazing guitarist and composer and he and everyone involved in this are so nice to organise this open mic every month.
We got there really early after school and had time for Subway. I was walking over to The Venue casually to check if anyone was there yet because it was only 6:30pm and sign ups only start an hour later. As I was walking there, I saw that there was only one person standing in front of the place so I prepared to sit down somewhere to wait. Little did I know that people began forming the queue behind me. I looked behind and there were about ten other people behind me already. Where did they come from? Anyway, I ended up third in line. 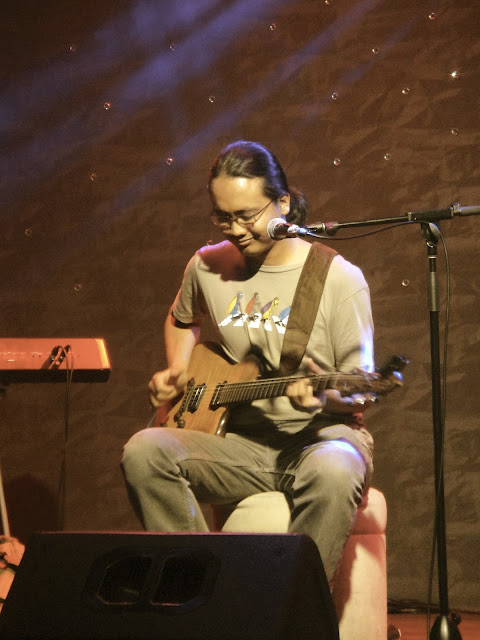 Az started by introducing himself and performing a song. He always seems to have a perpetual smile on his face that is almost infectious. And it always seems utterly effortless when he plays the guitar. It's always inspiring to listen someone so passionate about music perform. The sound of the guitar danced around the room with an almost surreal feeling. Then the shaking of ice in a bottle from the bar behind indicates coming back to the real world.  Magical. 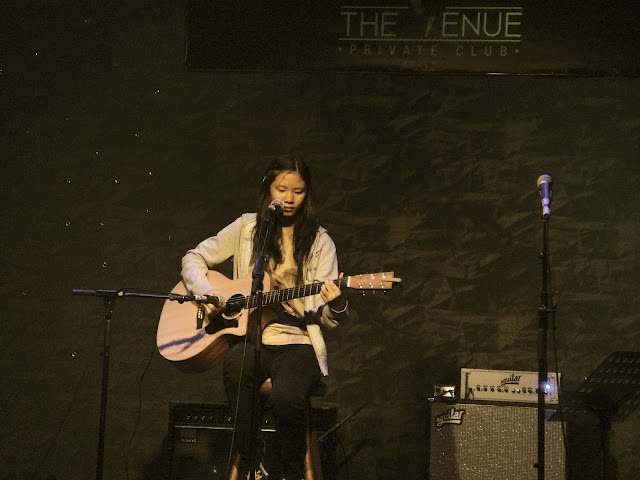 My turn came quickly and I was a little nervous, but not as nervous as before (thank goodness). I sang my original songs '17' and 'Clues'. I suppose people liked it, because they clapped. I enjoy doing this and I'm so glad that there are so many opportunities for people like me to come out of our little rooms to these open mic nights and sing in front of a real audience instead of a computer screen. I also went for Feedback open mic at Jaya One the week before and somehow there weren't many sign ups, so I got to sing four songs. It was so much fun.
Some people I've met argue that doing music is a highly-competitive business. But isn't everything? It doesn't feel like a competition though. I'm learning so much from these artists and everyone seems to be friends. By the way, there are over seven billion people in the world so wouldn't even living be competitive? There's a quote from someone on the other side of the world from where I am, and it says:

If I keep preparing for what I would do if I fail, then I would've have failed by not putting everything into what I actually want to do. Music is a very uncertain thing I am diving into. I don't know what will happen next. I don't know who would listen to and who wouldn't. Nothing really goes as planned. I'm not even sure if this would work out; but getting to perform makes me feel that somehow in a tiny little way, it gives me a little reassurance. I'm learning to embrace the little uncertainties in life. 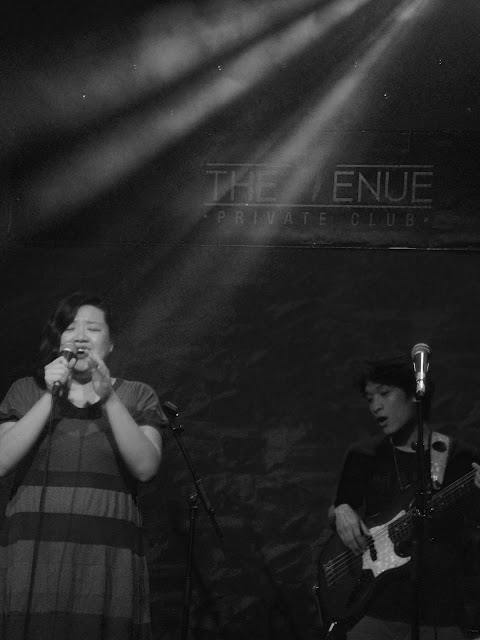 Bihzhu was one of the two featured acts that night. I met her from one of FEYST's event at No Black Tie a while ago. Her voice is amazing and her songs were stuck it my head, playing over and over until the next morning. She's got a song called 'Palpitations' and it's so fun and dance-y. My favourite lyrics of hers are "bloodless wounds take time to heal" and "and in the end we are all the same". Also, she calls my mom 'auntie'. To her defence, my mom is very "auntie"-like. 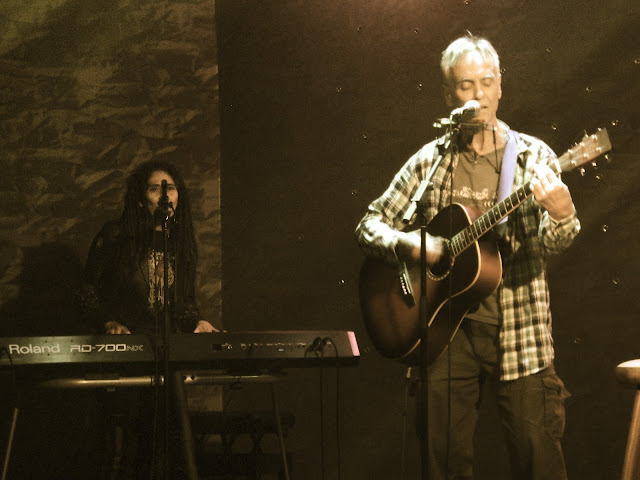 My mom and I stayed until Markiza and Peter Brown's performance; I met them at Doppel Kafe a few times and my dad's got one of their first albums released many years ago so we were both pretty big fans of theirs. He tells me the story of how Markiza and Peter were selling their album at Dataran Merdeka and that's when my dad bought their album.
They told us to come for the open mic's at The Venue so... we did.

This weekend, I'll be performing at
Heal Malaysia and I'll also be hosting my second open mic, Treehouse Open Mic. 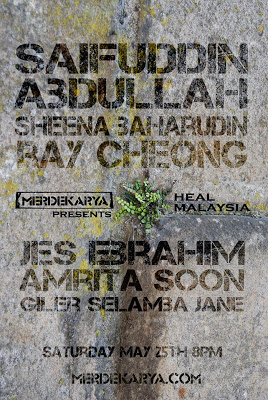 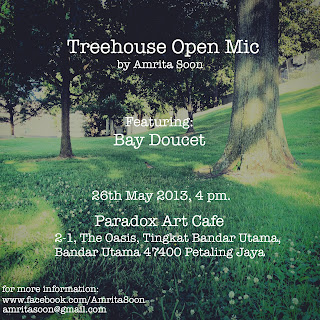 Lastly,
thanks for reading my blog, listening to my songs and liking my page. It really means a lot that you're supporting what I am doing.

May is already here and I am almost done with high school. Not graduating though, but taking an indefinite break. I've decided to put all my time and energy into music after the mid-terms and it absolutely scares me, because I don't know if it would work out. All I know is that I am working very hard and will continue to work very hard. I have no idea what is going to happen. And honestly, I'm terrified. All the questions of "what-if's" fill my mind constantly as I'm trying to balance hope and fear. I have given myself nothing to fall back on. Is that a good thing? I tell people what I want to do with my life and sometimes they'd completely support it and wish me all the best, and I am so grateful for them. Sometimes they'd tell me it's good, but not as a career. It's a healthy hobby, a fun weekend activity, but not a career. But I don't want to believe that. I don't want to believe the looks from them and I don't want to believe that I can't do this. Am I putting myself in an illusion just to face the cold, hard realisation of the truth? I guess only time can tell, but I don't want to look back years from now after choosing the safer path and always wondering about what could've been, but wasn't, you know?
Posted by Amrita Soon at 12:05 AM No comments: